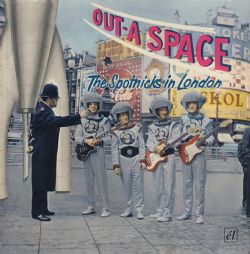 SKU: ACMEM250CD
Categories: 9.95, El, El Records Sale, El! Christmas Sale, Physical, Sitewide Sale
Share:
Description
The Spotnicks were Sweden’s first internationally famous
pop group whose outer-space-inspired, instrumental surf-twang climbed toward
the top of the European, Australian and Japanese charts in the early 1960’s.
During their rise to fame, they wore space suits on stage, though this image
evolved during the mid-sixties with French fashion guru Pierre Cardin designing
a futuristic Barbarellaesque look for them at one stage.
Instrumental guitar music was at its height of popularity
in the early sixties but The Spotnicks provided a unique sound and broad
international appeal born of an innate sense of fun that would see them outlast
almost all of their contemporaries.
In Roland Fereneborg that had a manager who was passionate
and enthusiastic. He groomed, choreographed and packaged his charges and was
decisive in exploiting their potential; sending them out on long tours to
England, France, Spain, Mexico, The United States and Japan The response was
enormous and so began a career of the biggest selling Swedish pop group after
Abba.
The centrepiece of this edition is of course The Spotnicks
1962 debut LP “Out-a Space… The Spotnicks in London” which is
augmented by all of their non-album single A & B sides released in 1961 and
1962; recordings made by the original line up of Bo “Mr Spotnicks”
Winberg (guitar), Bob Starander (guitar, vocals), Björn Thelin (bass) and Ove
Johansson (drums).

Also
included are both sides of the 7″ single by the Feenades,

a Bo Winberg side project (he multi-tracked all the instruments) that was
released exclusively on Philips Finland in 1961.