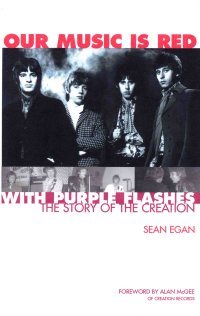 Our Music Is Red – With Purple Flashes: The Story Of The Creation
Sean Egan

Their songs have been covered by acts as diverse as Ride, Boney M and the Sex Pistols; they impressed Pete Townshend so much that he asked their guitarist to join the already successful Who; said guitarist pioneered the use of the violin bow on guitar strings – a trick promptly lifted and made famous by Led Zeppelin’s Jimmy Page; they inspired the name of Creation Records, the most influential record label of the ’90s; they have been cited as an influence by Paul Weller, Alan McGee, Ride, Pete Townshend, John Lydon and others.

Yet The Creation never had a bona fide hit single in either Britain or the US. They had a recording career that spanned merely mid-1966 to early 1968 and never – in their original incarnation – released an album on either side of the Atlantic. The Creation are pop’s quintessential example of Never Mind The Career Width, Feel The Musical Quality. Their compositions Makin’ Time, Painter Man, Biff Bang Pow, Nightmares, Can I Join Your Band, Life Is Just Beginning, Through My Eyes, How Does It Feel To Feel and others helped define psychedelia and pop art and are cherished by several different generations of music fans.

Sean Egan is the author of previous biographies of The Verve, The Animals and Jimi Hendrix. The book’s foreword has been provided by Alan McGee, former MD of Creation Records.