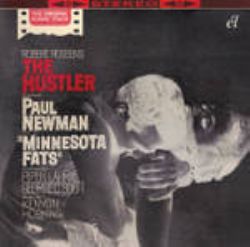 Original Film Soundtrack… Plus
Hustler (The)

‘The supreme classic of that great American genre, the low-life movie.’ The Observer


If ever Paul Newman needed a first-rate picture – and a chance to deliver a first-rate performance – it was in 1961. In the three years since Cat On A Hot Tin Roof, the actor had struggled to find the parts that might deploy the full range of his abilities and maintain the momentum of his career.


Director Robert Rossen, one of the masters of the neo-realistic film school, entered the scene to provide for Newman the part that was right for him in every way; that of the curiously dignified pool shark Eddie Felson in a complex, dark, and uncompromising movie called The Hustler.


The beautiful jazz score, re-released here for the first time, is by the composer Kenyon Hopkins (Baby Doll, 12 Angry Men, The Fugitive Kind) and our edition is completed by the music from two other fine Newman movies of the period; Paris Blues and The Long, Hot Summer, both directed by Martin Ritt, with soundtracks by Duke Ellington and Alex North respectively, (the latter Newman’s first appearance on the screen with Joanne Woodward.