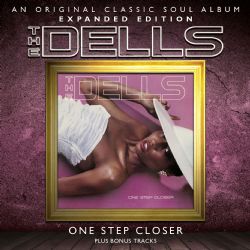 One Step Closer
Dells (The)

The mighty mighty Dells enjoyed an amazing run of hits, starting in 1956 with ‘Oh What A Night’ and continuing from 1966 to 1974 with Cadet Records (the Chess subsidiary).

Following stints with Mercury, ABC and 20th Century, the quintet signed with the L.A.-based Private I Records in 1984.

ONE STEP CLOSER was the group’s only album for the label. Primary producers for the project were Chuck Jackson & Marvin Yancy who had provided a run of hits for Natalie Cole among others.

Other producers on the album included guitarist David Williams (who had worked on the road with The Dells and whose credits included sessions with Michael Jackson and Herbie Hancock among others); and Archie Russel who had produced other Chicago-based artists including Gene Chandler, The Chi-Lites and Betty Everett.

Making its worldwide CD debut with this expanded edition (with notes from respected writer Lewis Dene which include quotes from Chuck Barksdale of The Dells), ONE STEP CLOSER was a Top 50 R&B Album best-seller while the first single from the set, ‘You Just Can’t Walk Away’ was a Top 30 U.S. R&B hit.