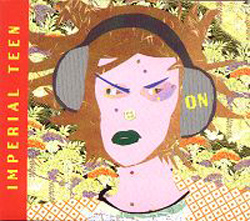 Imperial Teen was formed in San Francisco in 1995, by Roddy Bottum, Lynn Perko, Will Schwartz and Jone Stebbins. A pop aesthetic of crunchy guitar riffs and classic boy/girl harmonies quickly developed, finding all four members switching instruments and taking turns behind the mic. The band had barely been playing together for 6 months when they landed their first record deal (Slash / London) and found themselves in the studio. The result was the joyous “Seasick” album, which tickled the fancy of many a critic and music fan alike, with its infectious pop grooves.

Imperial Teen went on to release “What Is Not To Love” in 1999, and managed to garner even more praise, scoring an MTV-style breakthrough with their single “Yoo-hoo” which was included on the Jawbreaker soundtrack.

This new album “On”, has been produced by Steve McDonald (Redd Kross) and Anna Waronker (That Dog), with assistance from the band themselves and is the most stunning album of the Teen’s career, great hooks, melodies that soar and lyrics that reveal themselves to be much more than pure pop confection. Boy / girl harmonies mask lyrics with a bite, and guitars and keyboards are just as likely to drone as to chime, as Imperial Teen expand upon their already rich musical palette.