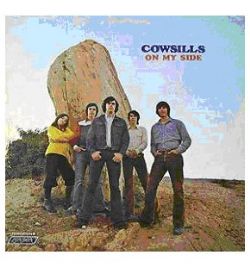 On My Side
Cowsills (The)

The Cowsills possessed one of the most pleasing vocal blends in all of popular music. In addition, they created—without proper credit—the blueprint for countless other singing “family bands,” including, the TV-created Partridge Family, who were actually based on The Cowsills.

Released in 1971, On My Side was the band’s swan song of their original era. Remarkably, The Cowsills were at the peak of their powers, beautifully melding their dynamic vocal ability with an earthier, west coast sound that at times recalls Crosby, Stills, Nash & Young and Sunflower/Surf’s Up-era Beach Boys.

This first-ever legitimate CD issue of ON MY SIDE—from the ORIGINAL MASTERS—includes THREE BONUS TRACKS, including the non-LP ‘You (In My Mind)’. All sourced from ORIGINAL MASTERS.
The full-colour booklet also includes rare, unpublished photos and extensive liner notes by Cowsills aficionado LISA SUTTON featuring the participation of original band members.
Additional information
Tracklist