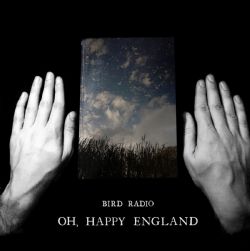 “A mix of old testament preacher and Captain Beefheart. There’s a touch of Tom Waits and Nick Cave in there too…” (jazzman.com)

· “Bird Radio is ‘future medieval’, as if J.G. Ballard had written The Wicker Man”. Steve Chandra Savale, Asian Dub Foundation
· “Bird Radio is a flute-toting, bass drum-beating sensation… A must-see live act.” Rick Pearson, Evening Standard
· “Oh, Happy England” is a collection of fourteen song settings of poems by British writer Walter de la Mare. Bird Radio developed this album with the active support of Aldeburgh Music where he composed and recorded the songs on residency with an ensemble of voice, flute, piano, cello, guitar, bass and percussion. Bird Radio states, “when you enter into a poem by Walter de la Mare, you are never certain of the boundaries between reality and dream. His poetry covers a broad spectrum of textures and emotions from moments of realisation and self-recognition as in “The Englishman” to dark, isolated and nightmarish scenes such as in “Drugged” and reveries such as in “Time Passes”.
· With the blessing of Walter de la Mare’s grandson Giles, folklorist/musician/curator Sam Lee and a mentoring programme with the new London initiative Meet The Artist.
· Bird Radio has performed his dark-folk music on independent and BBC radio as well as performances across the UK, Russia, Europe and the United States.
· Oh, Happy England is released in a matt finish limited edition digi-pack with a 20page booklet designed by Italian artist Chiara Ambrosio.
1. J.T. / HERE LIES OLD BONES
2. THE OWL
3. ALL THAT’S PAST / WINTER
4. THE STRANGER
5. HAPPY ENGLAND
6. MOTLEY
7. FEAR
8. DRUGGED
9. THE MONOLOGUE
10. I SIT ALONE
11. NEVER-TO-BE
12. TIME PASSES
13. THE ENGLISHMAN
14. THE SONG OF SHADOWS
PLEASE NOTE THIS ALBUM IS RELEASED ON 15TH JUNE 2015 AND WILL NOT BE DESPATCHED BEFORE THAT DATE
Additional information
Tracklist
TRACK LIST AS ABOVE
Reviews (0)