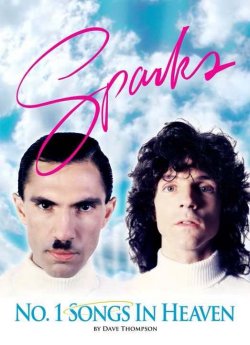 No. 1 Songs In Heaven – A Sparks Biography
Dave Thompson

No 1 Songs In Heaven is the first ever biography of one of the most remarkable bands in rock history. Since the moment they emerged into the mainstream in 1974, armed with the hit “This Town Ain’t Big Enough For Both Of Us,” Sparks – brothers Ron and Russell Mael – have endeared themselves to successive generations of fans, not only with their wry humour and offbeat quirkiness, but also with a lyrical and musical inventiveness that sees them numbered among the most influential acts ever. Morrissey, Siouxsie Sioux, the Pet Shop Boys and many more are numbered among Sparks’ most loyal disciples, while the group’s following is truly international.

Celebrating forty years of this incredible act (the band originally formed in 1969) and 35 years of hits, Number One Songs… is the ultimate guide to the history and the mystery of Sparks. Exclusive interviews and insights trace the group from its earliest strivings in California, all the way up to their so-successful present, while author Dave Thompson’s unique eye for period detail and context reveals just how intelligently Sparks have predicted the course of popular music over the past quarter century.

The book also includes a full worldwide discography, including albums, singles and audio visual material, certainly making it a must for Sparks fans everywhere.

Dave Thompson is the author of over 100 rock books, including best-selling biographies of Kurt Cobain, David Bowie, Cream and many more. His most recent publications include the controversial “I Hate New Music” (Backbeat Books) and the forthcoming “London’s Burning” (Chicago Press review). Born in Devon, England, he now lives in Delaware, USA.