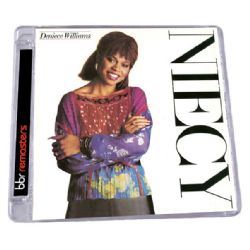 SKU: CDBBR0141
Categories: 9.95, Big Break Records, Physical, Sitewide Sale
Share:
Description
Throughout the seventies and eighties DENIECE
WILLIAMS released a string of successful works on Columbia/ARC Records, scoring
certified Gold selling albums on both labels along with numerous appearances
across the US and UK charts. In 1976 she
released her debut album, This Is Niecy, featuring the mega-hit FREE which
topped the UK Pop chart.
NIECY was released in 1982 album on ARC and was
produced by Deniece and Thom Bell. Thom has produced the likes of The
Delfonics, The Stylistics, Spinners, Johnny Mathis, Dionne Warwicke, MFSB,
Elton John, Teddy Pendergrass. The Temptations and Phyllis Hyman. He was also
inducted into the Songwriters Hall Of Fame in 2006.
IT’S GONNA TAKE A MIRACLE returned Deniece to
the R&B #1 position and also saw her re-enter the Pop top ten.
WAITING BY THE HOTLINE reached #29 R&B and
was sampled by Nas in 2000. The final single WAITING is a Quiet Storm classic
still played on radio today and reached R&B #72. I BELIEVE IN MIRACLES has
also been sampled by the likes of J-Live and Will Smith feat Jill Scott.
Released in deluxe Super Jewel cases, with bonus tracks, NIECY is a must
for all Soul and Funk fans out there!