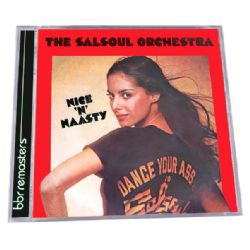 SKU: CDBBR0234
Categories: 9.95, Big Break Records, Physical, Sitewide Sale
Share:
Description
THE SALSOUL ORCHESTRA was the brainchild of once
MFSB member and legendary vibraphonist, Vince Montana Jr.
Formed in 1974 THE SALSOUL ORCHESTRA, house band
for the remarkable Salsoul Records, sometimes featured up to 50 members amongst
its ranks including a number of former musicians from MFSB of the Gamble &
Huff fronted Philadelphia International Records and fused elements of Funk,
Latin, Disco and Philly Soul into their compositions.
Conducted by Montana, THE SALSOUL ORCHESTRA began
an eight-year recording period in 1975 releasing eleven sensational albums
during that time featuring production input from Tom Moulton, Stan Lucas,
Patrick Adams and Bunny Sigler through the years.
BBR is proud to bring you the second instalment of
our Salsoul Orchestra reissues – The
Salsoul Orchestra – Nice & Naasty.
Recorded at the famous Sigma Sound Studios in Philadelphia with
production and much of writing being tended to by Vince Montana Jr., Nice & Naasty also features some
great musicianship from greats like Bobby Eli, Ron Kersey, Norman Harris and
Ron Baker.
Standout tracks include the title single, which
achieved a highly impressive #61 on the Billboard Hot 100 chart and Ritzy
Mambo, which also achieved a spot on the highly coveted singles chart. The
album itself accomplished a solid #30 position on the US Pop Album chart.
This newly remastered, fully expanded edition comes
packaged complete with extensive liner notes and added bonus content making
this BBR Remaster a must have for all Funk,
Soul, Disco, R&B and Philly Soul fans out there!