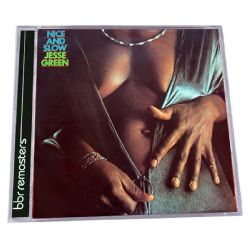 •    Locksley Alphonso Green, aka JESSE GREEN, was a Jamaican singer and multi-instrumentalist who spanned the genres from Reggae through to Disco during his well respected career. Growing up in the St. James parish of the famed island Green became enthralled with the music he heard from the various sound systems in the area, in particular the sound system headed by Count Barrett.

•    During the 60’s Green sang vocals with Jamaican band The Pioneers and in the 70’s toured internationally with the great Jimmy Cliff as his drummer before embarking on a solo career in 1976.

•    NICE AND SLOW was Green’s debut solo album and was released on the EMI record label in 1976 to high acclaim, despite not garnering the commercial success the album deserved. As was the burgeoning trend at the time Green appropriated the fledgling Disco and Soul sounds of the mid 70’s and scored a massive club hit with the album’s title track and opener which reached #1 on the U.S. Disco charts and #17 on the U.K. Pop charts. The second single from the album ‘Flip’ followed ‘Nice And Slow’ on to the dance floor peaking at #17 on the Disco chart in 1977. Both tracks have a sultry sweet soul sound on top of a solid bottom end groove.

•    Green’s Jamaican roots are still very much in evidence on the album, especially on ‘Flip’ and album track ‘You Came, You Saw, You Conquered’ which both exemplify the singers spirited vocal style. Other highlights are the ballad ‘The Greatest Love’ and the superb ‘You Are The Star,’ a propulsive, jazz influenced groove.

•    This BBR re-master is essential listening for all Disco, Soul and R&B fans out there!