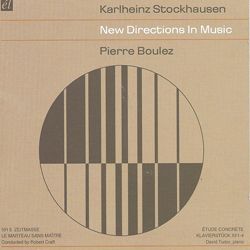 Karlheinz Stockhausen was hailed as the prophet of a new world of sound and a composer of unarguable greatness. He has also been attacked for his mystical, semi-hippie philosophy and for his impenetrable music. Not since Stravinsky has a composer generated such excitement and controversy.

His concerts in Europe, America, Japan and the Middle East offered a new kind of musical ritual, and his following amongst the young is such that one critic has called him the Pied Piper of Youth.

Stockhausen appears in Peter Blakes’ famous collage for the front cover of Sgt Pepper and inspired The Beatles to experiment with techniques ranging from the use of reversed tape to the total abandonment of metre and melody – evidenced most notably on Revolution 9. New Directions In Music includes Stockhausen’s Étude (the composer’s first experimentation in musique concrète, and David Tudor s premiere recording of all four movements of Klavierstück XI. These works are complimented by Robert Craft’s historic New Directions in Music album comprising Stockhausens Zeitmasse (Time-measures) for five woodwinds and Pierre Boulez Le Marteau sans maître (The Hammer without a Master).