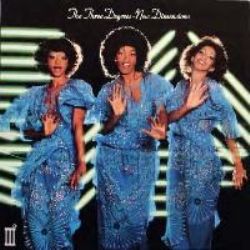 The Three Degrees were hugely successful internationally throughout the
seventies, particularly in the UK where they enjoyed ten top forty hits
including Year Of Decision, Take Good Care Of Yourself and the anthemic ballad When Will I See You Again,
all on Philadelphia International Records. New Dimensions was the trio’s first
album for Ariola Records where they were teamed with hotter than hot producer
Giorgio Moroder, who was riding high on his work with Donna Summer.

The top forty album spent thirteen weeks on the UK album chart in 1979
and spun off three hugely successful megahits in the shape of the discofied Giving Up, Giving In and The Runner as well as the top three
ballad Woman In Love.

Giving Up, Giving In / Falling In Love Again / Looking For Love / The Runner / Woman In Love / Magic In The Air /