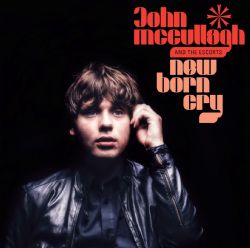 SKU: 359CD8
Categories: 10.95, 359 Music, Physical, Sitewide Sale
Share:
Description
“John is an amazing talent for such a young kid! To be honest, he’s just a natural!” – Alan McGee
• John McCullagh caused a splash with his debut album in autumn 2013, North South Divide – the first album on Alan McGee’s 359 Music label – which was particularly well received in the UK.
• John toured for most of late 2013/2014, opening for the likes of The Strypes, Alabama 3, The Enemy, Richard Hawley and most recently Cast.
• The highly acclaimed Doncaster singer-songwriter also assembled a new band The Escorts in time for his third single ‘Box Of Tricks’.
• John and his band are now back with a brand new album ‘New Born Cry’, produced by the talented John Power (Cast). This second album includes previous singles ‘Towerland Lullaby’ and ‘Box Of Tricks’, as well as forthcoming single ‘She’s Calling Me’.
• John has enjoyed exposure on XFM, BBC 6 Music and Radio 2 and attracted column inches in NME, Mojo, Uncut and many other publications.
“Who is this kid doing Dylan better than Dylan?”  – Courtney Love
N.B. This title is released 4th May and will not be dispatched before this date.