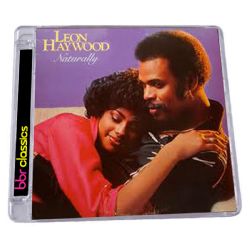 LEON HAYWOOD, who hailed from Houston, Texas, was a singer, songwriter , producer and pianist who is arguably best known in the USA for his crossover 1975 hit ‘I Want’a Do Something Freaky To You’ which has been sampled a multitude of times, most notably on Dr. Dre’s ‘Nuthin’ But A G Thang.’ Haywood had a long and varied career which included accompanying Guitar Slim on piano when he was still in his teens, as well as joining Sam Cooke’s band as keyboardist until the singer passed away. During the 60’s he released his own instrumental sides and singles as well as playing on R&B hits for short lived outfits such as The Packers and The Romeos. This period culminated in his first solo R&B hit ‘It’s Got To Be Mellow’ which peaked at #21 in 1967 on Decca Records.

NATURALLY was Haywood’s ninth studio album and was released in 1980 on 20th Century Fox Records, giving him his most successful release for many years with the LP peaking at #22 R&B and #92 Pop. Haywood was adept at appropriating the musician styles and trends of the day and NATURALLY exemplifies this skill as it stands up to, and in many instances surpasses many of his contemporaries at the time.

The opening track and first single, ‘Don’t Push It, Don’t Force It’ gave Haywood his biggest chart hit as it reached #2 R&B, #10 Disco and crossed over to #49 Pop, as well as #12 Pop in the U.K. The clean, crisp, funky tone of this mid-tempo groover locks you in from the opening bars and won’t let go, setting the scene for the rest of the album. Second single ‘If You’re Looking For A Night Of Fun (Look Past Me I’m Not The One)’ (R&B #67) is another incessantly solid and funky track with Haywood refreshingly looking to get to know his intended in body, mind and soul before gettin’ it on. Other very notable tracks are ‘Daydream’ and the accusatory ‘Who You Been Giving It Up To.’

At this time Haywood also penned several songs for Carl Carlton’s eponymous album including the smash hit ‘She’s A Bad Mama Jama (She’s Built, She’s Stacked).’ Watch out for this album as a forthcoming release on BBR. · BBR is proud to release the first ever CD issue of NATURALLY, this fully remastered and repackaged edition comes with extensive liner notes and bonus content and is a must for all Funk, Soul and Disco fans out there!

4. LOVE IS WHAT WE CAME HERE FOR