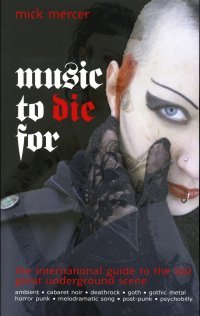 Music To Die For
Mick Mercer

Since Mick Mercer’s acclaimed 21st Century Goth book was published in 2002, the MySpace internet phenomenon has helped fuel a worldwide explosion of related music. Nut as well as adding countries to the musical map, the pot-Goth scene has resulted in a bewildering variety of musical sub-genres. This book is intended to be the ultimate resource to make sense of the chaos, covering the fields of Ambient, Cabaret, Noir, Deathrock, Goth, Gothic Metal, Horror, Punk, Melodramatic Song, Pos-Punk & Psychobilly.

Packed with discographical information, web addresses line-ups and often contributions from the bands themselves, this is the first edition of a book that will be turned to again & again & will undoubtedly appear in new editions as the years pass. It is also copiously illustrated with band photos – a crucial component when the visual image is so important.

Mick Mercer is the authority on all things Got and post-Goth. His previous books have been renowned for his combination of encyclopaedic knowledge and opinionated writing style.

Music To Die For will fill a niche on music fan’ bookcases alongside Cherry Red’s previous genre-defining directories ‘The Day The Country Died’, ‘No More Heroes’ & ‘Burning Britain’