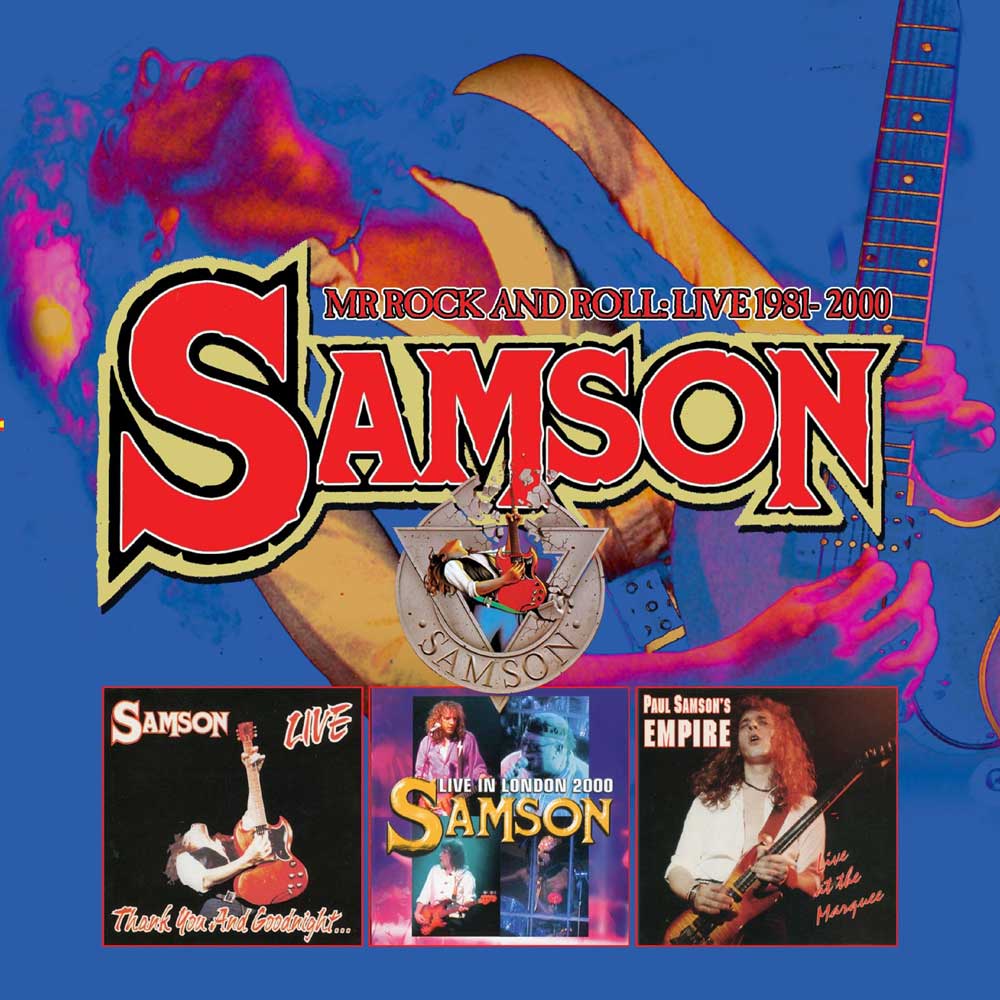 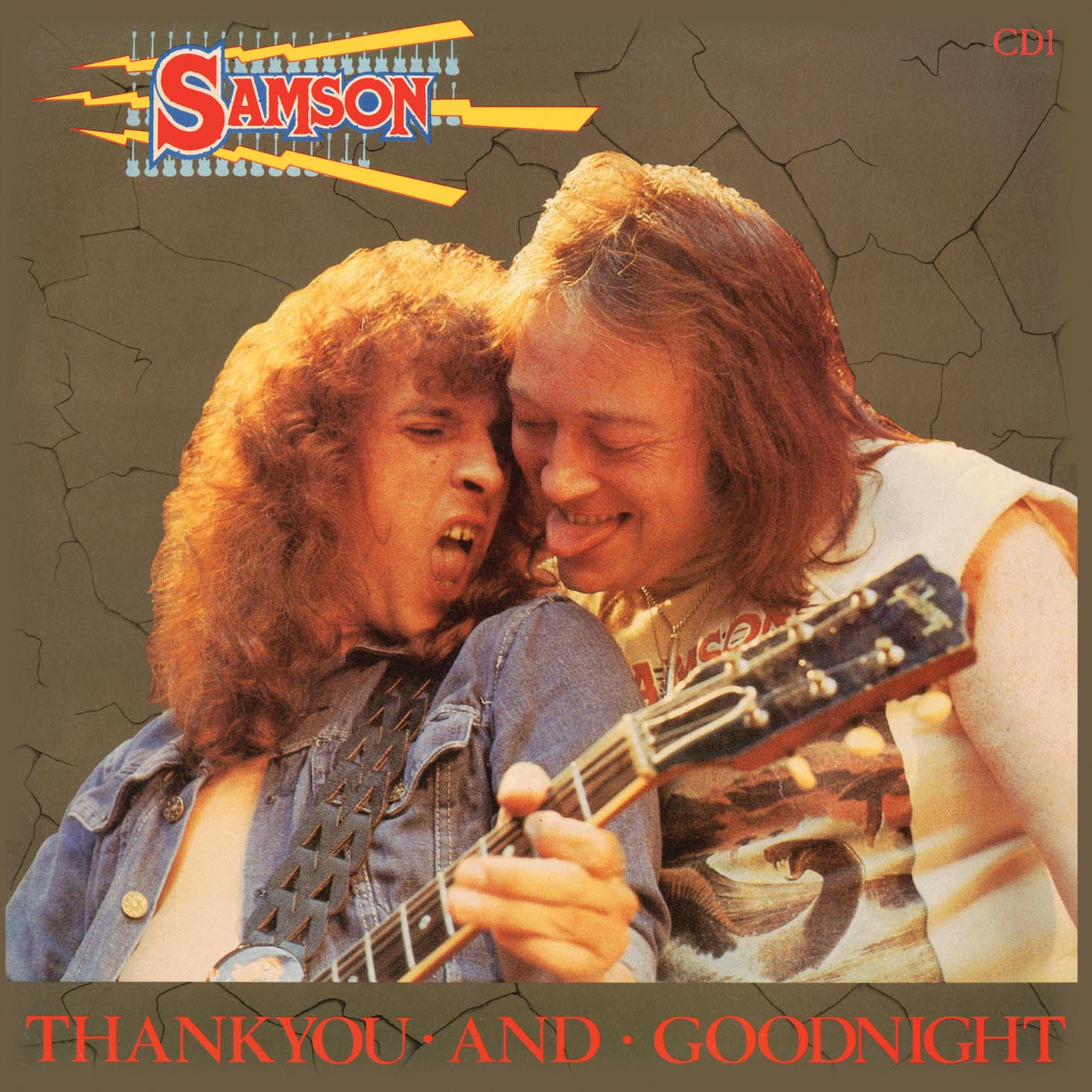 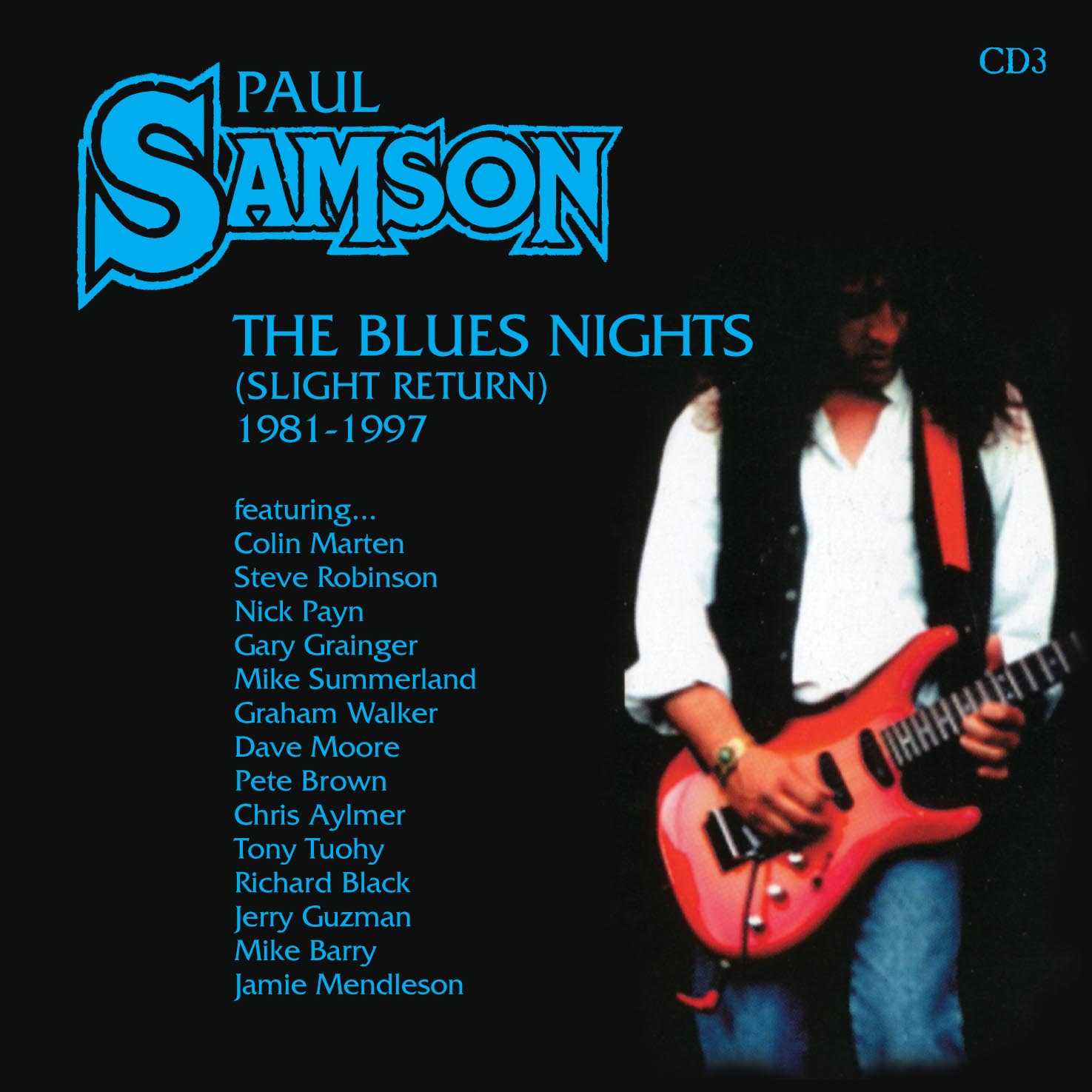 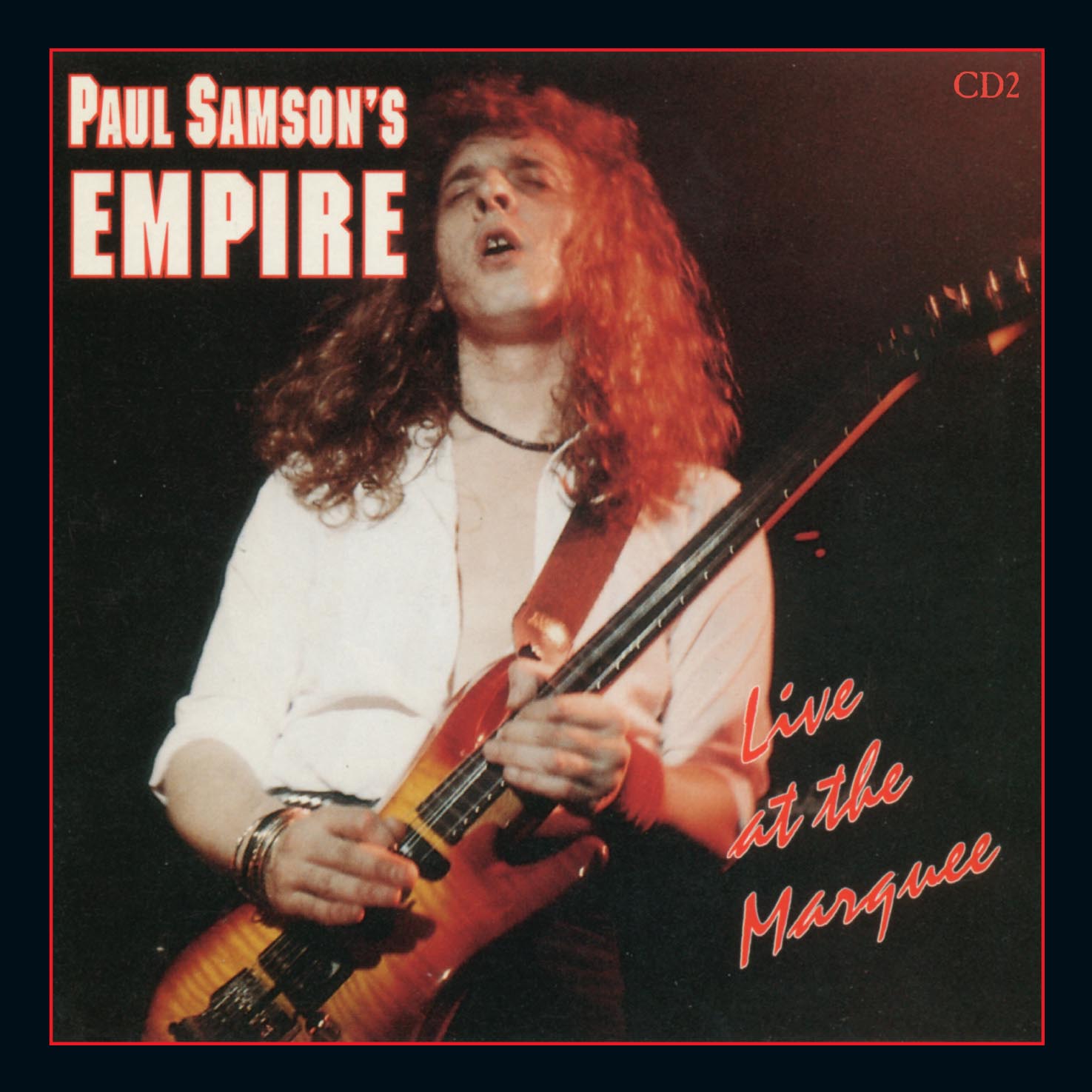 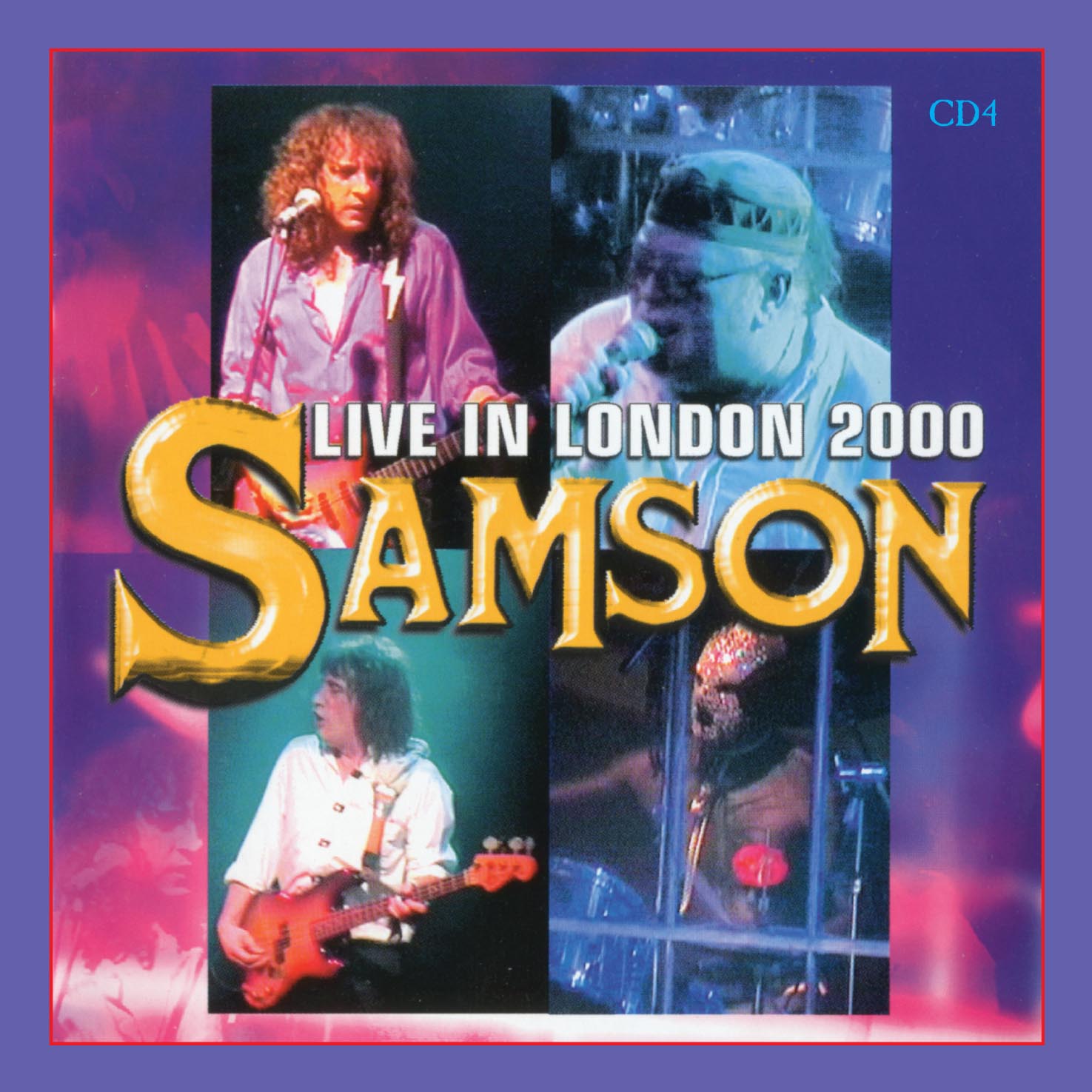 A 4CD Box Set of Samson material.  This collection features 1985’s “THANK YOU AND GOODNIGHT”, the acclaimed live album recorded in Holland and Germany in March and April 1984 on the tour to promote the “Don’t Get Mad Get Even” album, “PAUL SAMSON’S EMPIRE LIVE AT THE MARQUEE” at London’s legendary club on 29th May 1986, “THE BLUES NIGHTS (SLIGHT RETURN)”, a collection of live recordings from some of his low-key blues jams and other projects and LIVE IN LONDON 2000” – the band’s reunion show at London’s LA2.

• The “Heavy Metal Crusade” tour of 1979, where Samson were supported by up and coming East Londoners Iron Maiden, alongside Saxon, Angelwitch and the Nicky Moore Band, is renowned for being the beginning of what became known as the “New Wave Of British Heavy Metal” (or NWOBHM). By July, the band had expanded to a four-piece with the addition of vocalist Bruce Dickinson. Over the following two years they released “Head On” and “Shock Tactics”, and toured with Rainbow, Uriah Heep and Robin Trower, among others.

• Following a triumphant show at the 1981 Reading Festival, Bruce left for worldwide success with Iron Maiden, joining ex-Samson drummer Clive Burr. Dickinson was replaced  by ex-Hackensack and Tiger vocalist Nicky Moore, and the  new look Samson were snapped up by Polydor Records. After two very successful studio albums, and major tours with Blackfoot, Whitesnake and Gary Moore, Samson came to a premature end.

• Pete Jupp and Merv Goldsworthy formed FM, whereas Paul Samson recorded the solo album “Joint Forces” with both McCoy and Moore, after which he formed “Paul Samson’s Empire” to promote the album, which included shows with Iron Maiden on their “Somewhere On Tour”. Paul spent the next few years pursuing various projects, including his passion for the blues, and a period in Chicago with the Richard Black Project, before the late 90s brought about a much demanded Samson reformation, which lasted until his sad and untimely death in 2002.

• This collection kicks off with 1985’s “THANK YOU AND GOODNIGHT”, the acclaimed live album recorded in Holland and Germany in March and April 1984 on the tour to promote the “Don’t Get Mad Get Even” album. With Paul Samson on guitar and vocals, lead vocals from Nicky Moore, Pete Jupp on drums, and new additions Dave “Bucket” Colwell on rhythm guitar and Merv Goldsworthy on Bass, the band powered through versions of classics including ‘Losing My Grip’, ‘Vice Versa’, ‘Tomorrow Or Yesterday’ and ‘Mr Rock And Roll’, as well as five tracks from the recently released album. This first CD is augmented by the addition of the “Live At Mildenhall 1982”, 3-track EP, featuring the Samson/Moore/Jupp/Aylmer line-up on their first major UK outdoor appearance at the East Anglia Rock Festival, Mildenhall, Suffolk on 24th July 1982.

• Following the split, he formed Paul Samson’s Empire to promote “Joint Forces”, and included Dave “Bucket” Colwell from the last Samson line-up on 2nd guitar and keyboards, Kevin Riddles (Angelwitch, Tytan) on bass, Mark Brabbs (Tank) on drums and Sam Blue on vocals (ex-Emerson, and later with Ultravox & Dizzee Rascal). They are captured live here on “PAUL SAMSON’S EMPIRE LIVE AT THE MARQUEE” at London’s legendary club on 29th May 1986, with a set that includes ‘Burning Emotion’, ‘Vice Versa’ and ‘Earth Mother’, as well as new compositions that show a more commercial side. This disc also includes three studio bonus recordings from the band; ‘Tomorrow’, ‘Don’t Turn Away’ and ‘Stranger’.

• Paul’s first love was the blues, which he revisits on “THE BLUES NIGHTS (SLIGHT RETURN)”, a collection of live recordings from some of his low-key blues jams and other projects. The album opens energetically with Paul’s version of Sam Apple Pie’s ‘Louise’, recorded on a night off from recording “Shock Tactics” in 1981, where he was joined by a couple of old friends at the legendary Prince Of Wales pub in Gravesend, where only two years previously he had discovered the then-unknown Bruce Dickinson. This is followed by some Hendrix covers from a warm-up show in Plymouth for the tour to promote the “1993” album. In October 1995, Paul was invited to play at the “Rattlesnake Guitar” Peter Green tribute concert along with such luminaries as Graham Walker, Nick Payn, Pete Brown, Gary Grainger and many others. Paul played lead guitar on three tracks, including ‘Love That Burns’ and ‘Albatross’ and found himself singing lead vocal on ‘Black Magic Woman’. At the Peter Green show, Paul met Richard Black from Chicago, and soon became a part of The Richard Black Project. They toured the US, and recorded an album in Chicago. Two tracks here are Richard Black Project originals, and recorded on tour in Golden, Colorado on 20th July 1996. On his return to the UK, Paul reformed the 1993 three piece with Chris Aylmer and Tony Tuohy, which included supporting Pat Travers in London on 7th February 1997, from where we have included covers of Hendrix’s ‘Voodoo Chile (Slight Return)’ and ZZ Top’s ‘Fool For Your Stockings’. The third disc is rounded off with a track from the Richard Black Project Chicago sessions, and is believed to be the first ever cover of a then previously unreleased Hendrix song, ‘Cherokee Mist’.

• By 1999, the NWOBHM had reached its 20th anniversary, and there was much demand for a Samson reformation. Paul got back together with bassist Chris Aylmer and enigmatic drummer Thunderstick, and played a hugely successful show in Tokyo as the classic pre-Dickinson three piece line-up. On their return to the UK, Paul contacted Nicky Moore, who was keen to be involved, so the new Samson for 2000 became a combination of the best known line-ups from the early 80s. Following a warm-up show in Birmingham, the reformed and rejuvenated Samson hit the stage of London’s LA2 on 26th May 2000. Despite some technical hitches, the show was a huge success, and the atmosphere can be felt on “LIVE IN LONDON 2000”, featuring classics from all of the first five albums, including ‘Test Of Time’, ‘Turn Out The Lights’, ‘Don’t Get Mad, Get Even’, ‘Red Skies’, ‘Earth Mother’ and ‘Tomorrow Or Yesterday’, with the added bonus of the new ‘Brand New Day’.

• Whilst recording a new studio album in 2002, Paul was diagnosed with cancer and passed away on the 9th August. This 4 disc set shows that there were many sides to his playing and songwriting, and that he was at his inventive and improvisational best on stage.

Additional information
Tracklist
DISC ONE:
THANK YOU AND GOODNIGHT (1984) 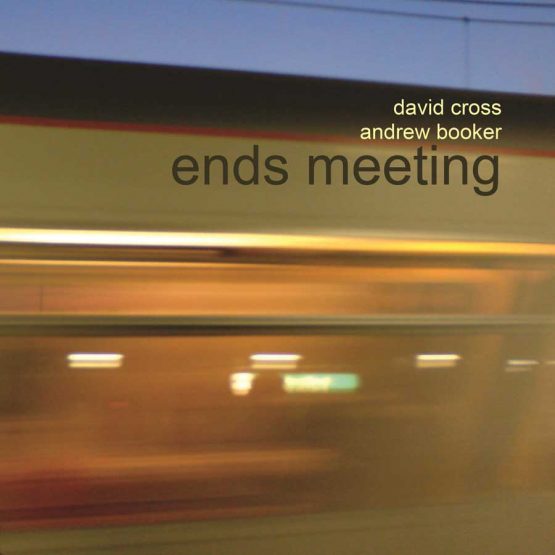