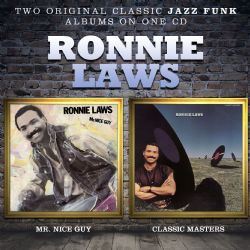 Saxophonist/master musician, singer, songwriter and producer Ronnie Laws first began making an impact as a soloist with the 1975 release of his Blue Note album, “Pressure Sensitive.”

By the start of the ‘80s, the Houston-born member of the musically prolific Laws family was topping the U.S. jazz album charts and building a solid audience among R&B fans on both sides of the Atlantic.

As part of its’ jazz/funk series, SoulMusic Records has combined one of Ronnie’s most sought after albums, 1983’s MR. NICE GUY with the 1985 release CLASSIC MASTERS which contains a number of Ronnie’s most enduring recordings from the ‘70s and early ‘80s.

A U.S.Top 10 jazz and Top 30 R&B best-seller, MR. NICE GUY focused on Ronnie’s vocals as much as it did his prowess as an instrumentalist: the album contained the Top 40 R&B hit, ‘In The Groove’ (a favourite among UK rare groove lovers), the synth-driven title track and a hip cover of Jr. Walker’s ‘What Does It Take (To Win Your Love).’ The album was reissued in the early 2000’s as a limited edition but has been out of print for several years.

As its’ name implies, CLASSIC MASTERS includes some of Ronnie’s most memorable recordings including his original of ‘Always There’ (1976), later covered by Side Effect and Incognito; ‘Friends And Strangers,’ the title cut of his 1977 best-selling album; and ‘Every Generation,’ Ronnie’s highest-charting U.S. R&B single. The track ‘City Girl’ (a Top 40 R&B hit) was recorded specifically for CLASSIC MASTERS. Includes notes by U.S. writer Jeff Lorez with new quotes from Ronnie.