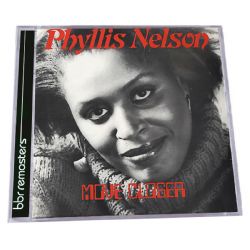 •    PHYLLIS NELSON was an American R&B/Dance singer and songwriter from Gary, Indiana who found fame in the UK in the 1980’s after recording and performing predominantly disco and dance music with modest success since the mid 1970’s. Nelson first hit the charts in 1980 when her single ‘Stop The Rain’ reached #20 on Billboard’s disco chart.

•    Inspired by her relationship with her husband, Nelson made a departure from her usual dance orientated material and penned a ballad, ‘Move Closer,’ which became the opening track and title of her debut album on Carrere Records. Released in the UK and Europe the album provided an immediate change in fortune for the versatile vocalist.

•    Released in 1984, MOVE CLOSER, which peaked at #29 on the UK album charts, is a soul record of broad scope with varying styles and boasts two beautiful ballads penned by the maturing vocalist herself. Also first released as a single in 1984, the dynamic and sensitively sung opening track, describing the frustration of being apart from your lover, was championed by a London radio DJ who set the track on a slow burn up the UK singles charts. ‘Move Closer’ reached the summit after 11 weeks, spent 6 months on the chart and made history as the first UK #1 single to be both written and performed by a black female artist.

•    MOVE CLOSER also includes single ‘Stop Don’t Do This To Me,’ a slick, minimal R&B groove, and the sweet soul ballad ‘Happy To See You,’ the second track written by Nelson.