We use cookies to ensure that we give you the best experience on our website. Click OK to accept and continue shopping, or find out more in our cookie policy...OKRead More
Return to previous page
50% 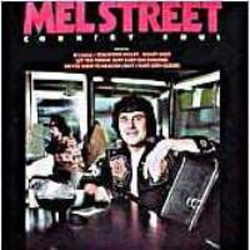 Released 26/10/09. Mel Street was born King Malachi Street on October 21, 1935, near Grundy, Virginia. The coal miner’s son would emerge as one of the finest and most prom-ising country singers of the 1970s. Mel began his career in the 1950s on Cecil Suratt’s radio show on stations WELC and WBRW in Welch, West Virginia. By 1960, Mel had moved to Niagara Falls, where he sang in nightclubs and then later he moved to Bluefield and started performing as a member of the band called the “Swing Kings” on WHIS-TV’s Country Jamboree.

He then had his very own Saturday evening half-hour show, Country Showcase from 1968 to 1972. The owners of a cable television company saw his work and suggested he cut a record on their small upstart Tandem label, so he recorded his four songs in Nashville in 1970. One of which, Mel’s own Borrowed Angel gained enough airplay to catch the attention of Royal American Records, who by 1972 signed a deal with Mel and catapulted the song all the way to the Country Top 10. His follow-up Lovin’ On Back Streets (on Metromedia) hit the Top Five. In 1973, Mel had two Top 15 hits and he also sang the theme song to the TV western comedy Dusty’s Trail. In 1976, he hit the Top Ten again with I Met a Friend of Yours Today, (more recently recorded by George Strait). Then he signed to a major label Polydor – and scored a Top 20 hit with Barbara, Don’t

Additional information
Tracklist
MEL STREET (Polydor PD6114)
Close Enough For Lonesome / If This Is Having A Good Time / Virginia How Far Will You Go / I'll Leave This World Loving You / This Lady Is My Bed / Barbara Don't Let Me Be The Last To Know / Only Time Will Tell / I'm Just A Redneck In A Rock'n Roll Band / This Has Got To Last / Daylight Strangers, Midnight Friends / My Friend The Jukebox