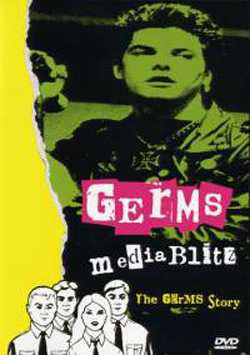 The first ever DVD to feature one of the seminal US punk bands of all time – The Germs. The Germs were led by their perversely charismatic lead singer, Darby Crash, and took their musical cues from the Sex Pistols (and English punk in general), as well as the CBGB’s scene, adding the theatricality of Bowie, Iggy, and Lou Reed.
Crash was the perfect frontman for the Germs. Backed by guitarist Pat Smear (later of Nirvana and the Foo Fighters), bassist Lorna Doom, and drummer Don Bolles, the Germs kicked up a hellacious racket that strayed from fast/loud punk into art damage and garage grunge.
On-stage, their gigs bordered on performance art, with Crash in full Iggy frenzy, diving into the crowd, adorning himself with whatever foodstuffs the audience provided, wearing less-and-less clothing, all done while the band cranked out noisy spasms of simple, but effective, rock noise.
‘Media Blitz’ is the essential Germs package, containing a raucous live show performed by the band at world famous Whisky club in L.A. at the height of their success in 1979. The package also contains a collection of rare and unreleased live and studio tracks.
The second disc in the package contains a unique and insightful interview with Germs founder member Don Bolles, who details the band’s career and photo gallery.