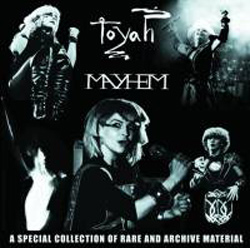 The third in our critically acclaimed Toyah series, this album was originally issued as a limited edition collectors release (vinyl only) by Safari Records in 1985. It compiles a wealth of previously unreleased and unheard rare and archive material

A perfect companion to the Safari Singles Collections and ‘Wild Essence’ DVD (also available this month), this fascinating album gives an insight into work in progress by Toyah in the late 1970s and early 80s. Mayhem comprises finished songs not included on EPs and albums, demos and alternate versions unavailable anywhere else.

The 15 tracks which make up ‘Mayhem’ include the majestic opener ‘Clapham Junction,’ an alternate version of the Toyah classic ‘Danced’ and a unique cover of ‘I Believe in Father Christmas’ — originally recorded for Granada TV’s 1982 special ‘Pop Goes Christmas.’ Tracks from the demo tape which got Toyah signed to Safari Records in 1978 also feature in this anthology of lost classics, curiosities and studio doodles.

The CD includes the full 15 track album with three tracks only included on the original cassette version. In addition, this brand new expanded version of Mayhem will includes 5 further bonus tracks never before commercially released or included on any Toyah CD!

The package will be rounded out with rare, archive images and comprehensive sleeve notes by The Official Toyah Website webmaster which finally reveal the origins of the tracks in a
song-by-song commentary, not included in the original release.