We use cookies to ensure that we give you the best experience on our website. Click OK to accept and continue shopping, or find out more in our cookie policy...OKRead More
Return to previous page
View cart “Alien Sex Fiend: Possessed, Limited Edition 2LP Gatefold VinylAlien Sex Fiend” has been added to your cart. 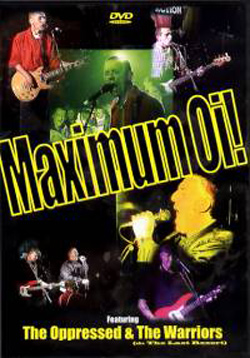 Formed in Cardiff in 1981 by singer guitarist Roddy Moreno, The Oppressed were soon at the forefront of the burgeoning Oi! phenomenon. Over the next four years they played extensively, recorded an EP ‘Never Say Die’ and a single ‘Victims/Work Together’. However gig violence was to eventually take its toll and the band reluctantly split in 1984. 10 years later, appalled by the lack of attitude and the general ignorance on the street rock scene, Moreno reformed the band and went on to record 3 singles and 2 albums. Taking their name from a clothes store in London’s East End, The Last Resort, hailed from Herne Bay. Formed by Roi Pearce in 1980 they were enthusiastically adopted by the Oi! movement. In early 1981 singer, Graham Saxby left the band for personal reasons and Roi took over on vocals. In the meantime Roi had copyrighted the band’s name, therefore any line-up that came along not including Roi were called The Warriors. The Last Resort continued to play in various forms until 1984 when they split as a result of being targeted by the racist witch-hunt of that era. In March 1996 both the Oppressed and the reformed Warriors (Roi wasn’t in the line up but Graham Saxby was coaxed out of retirement for the event) played a one-off informal gig in Cardiff in front of around 500 invited guests. Veteran punk video label Visionary was there to record the show and produced what was to be the first ever video release of these two legendary bands. Now, for the first time, both sets are available on one DVD, along with rare interview footage with members and ex-members of the bands. As a document featuring two of the most successful bands to emerge from Oi! scene, which continues to prosper and build to the present day, “Maximum Oi!” will be popular amongst fans of both bands and the wider Oi! genre. The DVD will be serviced to all major music and DVD press / and all Oppressed / Warriors, general Oi! and related websites.