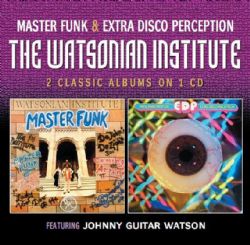 SKU: CDBRED547
Categories: 10.95, Cherry Red Records, Physical, Robinsongs, Sitewide Sale
Share:
Description
Robinsongs and Cherry Red are honoured to representing the Legendary
Johnny Guitar Watson’s DJM catalogue. And as part of that deal we are releasing
a 2 on 1 of Johnny’s infamous backing
band The Watsonian Institute, making the albums “Master Funk” & “Extra
Disco Perception” available for the first time on CD.
These albums were originally released in 1978 & 1979 respectively,
and include the R&B single classic “Master Funk”
Both albums were produced & arranged
by Johnny Guitar Watson so that Funky Groove you would expect from Mr
Watson is very evident on these titles.
These two albums have extremely rare to find on vinyl, and are a must
have for Funk fans around the world.
Highlights to look out for on these albums are the tracks ‘Master Funk’,
‘De John’s Delight’, ‘New York, New York’
and ‘Lil’ Sis’.