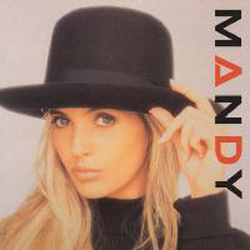 Released 13/04/09. The very first album to be released on Pete Waterman’s PWL label back in 1988, Mandy Smith’s one and only album “Mandy” is given a re-mastered Special Edition reissue. This Special Edition features the singles “I Just Can’t Wait”, “Positive Reaction”, “Boys And Girls” and “Victim Of Pleasure”, with the addition of a subsequent release, Mandy’s 1989 cover of the Human League classic “Don’t You Want Me Baby?”.

Exclusive bonus tracks have been selected direct from the PWL archives. Long thought to be mere rumour, an unreleased Hi-NRG cover of Twinkle’s 1964 smash “Terry” and Mandy’s original version of the Kylie Minogue hit “Got To Be Certain” feature together with rare mixes of all five singles. These include a bona-fide Balearic classic: the Cool And Breezy Jazz Version of “Mandy’s Theme (I Just Can’t Wait)”.

A successful model, Mandy was only 16 when she launched her music career, but media interest was focused on her personal life and UK chart success proved elusive. However, she scored major hits internationally, notably across Europe and in Japan, and her album remains a favourite for many 80s pop devotees.