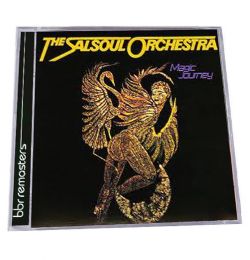 · Formed in 1974, THE SALSOUL
ORCHESTRA, house band for the remarkable Salsoul Records, sometimes featured up
to 50 members amongst its ranks. This included a number of former musicians
from MFSB, the house band for the Gamble & Huff fronted Philadelphia
International Records, who fused elements of Funk, Latin, Disco and Philly Soul
into their compositions.

· BBR is proud to bring you the third
instalment of our Salsoul Orchestra reissues, MAGIC JOURNEY, which climbed all the way to #61 and spent an incredible 20 weeks
on the R&B album charts. Recorded at the famous Sigma Sound Studios in
Philadelphia with much of the writing, arranging and production being tended to
by Vince Montana Jr. himself, MAGIC
JOURNEY also features some great musicianship from legends like Bobby Eli, Ron
Kersey, Norman Harris and Ron Baker to name but a few.

· Standout tracks include the hit
single Run Away, which featured
Loleatta Holloway on vocals and spent 6 weeks on the R&B charts peaking at
#84. The track would later be revived by Masters At Work with the help of Vince
Montana Jr. himself on their 1996 rendition under their Nu-Yorican Soul alias.
Other notable tracks include Magic Bird
Of Fire with its ominously driven beginning that gives way to an upbeat
bass riff coupled with some R&B inspired piano as well as the unmistakable
Salsoul groove, and Getaway, with its
fusion of disco and Latin flavours.

· This newly re-mastered, fully
expanded edition comes packaged complete with extensive liner notes and added
bonus content making this BBR re-master of The
Salsoul Orchestra – Magic Journey a must have for all R&B, Funk, Soul,
Latin, Disco, and Philly Soul fans out there!