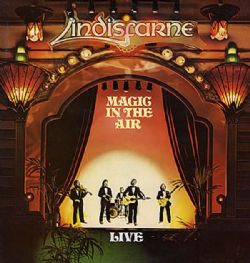 Magic in the Air
Lindisfarne

SKU: ECLEC2314
Categories: 10.95, Esoteric Recordings, Esoteric Sale, Physical, Sitewide Sale
Share:
Description
Esoteric Recordings are pleased to announce a new
remastered edition of the wonderful 1978 live album by LINDISFARNE,
“MAGIC IN THE AIR”. The album was recorded at Newcastle City Hall on
Christmas Eve 1977 and was a reunion event which would eventually lead
to the band recording their 1978 studio album “BACK AND FOURTH”.The live
set performed by the band featured classic tracks such as ‘LADY
ELEANOR’, ‘FOG ON THE TYNE’, ‘JANUARY SONG’, ‘MEET ME ON THE CORNER’ and
‘WINTER SONG’ with LINDISFARNE in fine form.
Additional information
Tracklist
Lady Eleanor  / Road To Kingdom Come  / Turn A Deaf Ear  / January Song
/ Court In The Act  / No Time To Lose  / Winter Song  / Uncle Sam  /
Wake Up Little Sister  / All Fall Down  / Meet Me On The Corner  / Bye
Bye Birdie  / Train In G Major  / Scarecrow Song  / Dingley Dell /
Scotch Mist  / We Can Swing Together  / Fog On The Tyne / Clear White
Light Released on 27/02/12.
Reviews (0)