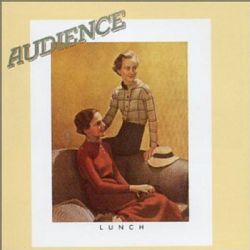 SKU: ECLEC2493
Categories: 10.95, Esoteric Recordings, Esoteric Sale, Physical, Sitewide Sale
Share:
Description
• A NEWLY REMASTERED & EXPANDED EDITION OF THIS CLASSIC 1972 ALBUM BY AUDIENCE
• REMASTERED FROM THE ORIGINAL CHARISMA MASTER TAPES
• WITH THREE BONUS TRACKS
• BOOKLET WITH NEW ESSAY & INTERVIEW WITH HOWARD WERTH
ESOTERIC RECORDINGS are pleased to announce the release of a newly remastered and expanded edition of the classic 1972 album by the legendary Progressive Rock group AUDIENCE, “Lunch”.
Along with GENESIS and VAN DER GRAAF GENERATOR, Audience were one of the key bands on the roster of the Famous Charisma Label in the early 1970s.
Comprising HOWARD WERTH (Vocals, Electric Nylon String Guitar), KEITH GEMMELL (Saxophone, Clarinet, Recorder, Flute), TREVOR WILLIAMS (Bass, Vocals) and TONY CONNOR (drums, percussion, vibes), Audience had a fanatical following, particularly on the continent, where their jazz-influenced brand of Progressive Rock proved popular (earning the band Top Ten status in Italy).
“Lunch”, released in February 1972, was the band’s final album of the 1970s and reached number one in Italy. Produced by Gus Dudgeon, the album featured contributions from the legendary saxophonist BOBBY KEYS and from Trumpet player and Trombonist JIM PRICE who completed the album following the departure of KEITH GEMMELL from the band mid-way through recording sessions.
This Esoteric Recordings reissue includes three bonus tracks and has been remastered from the original Charisma master tapes. It features a booklet with restored artwork and an essay by Sid Smith with an exclusive interview with Howard Werth.
N.B This title is released 25th May and will not be dispatched before this date.
Track Listing:
1. STAND BY THE DOOR
2. SEVEN SORE BRUISES
3. HULA GIRL
4. AIN’T THE MAN YOU NEED
5. IN ACCORD
6. BARRACUDA DAN
7. THUNDER AND LIGHTNING
8. PARTY GAMES
9. TROMBONE GULCH
10. BUY ME AN ISLAND
BONUS TRACKS
11. GRIEF AND DISBELIEF
RECORDED AT TRIDENT STUDIOS, LONDON ON 11TH OCTOBER 1971
12. HARD CRUEL WORLD
B-SIDE OF SINGLE
13. ELIXIR OF YOUTH
FEATURED ON THE COMPILATION “AUDIENCE”
RELEASED AS CHARISMA CS 7 IN 1973
Additional information
Tracklist
Track listing as above.
Reviews (0)