We use cookies to ensure that we give you the best experience on our website. Click OK to accept and continue shopping, or find out more in our cookie policy...OKRead More
Return to previous page
View cart “Boomania: Deluxe EditionBetty Boo” has been added to your cart. 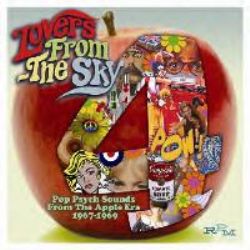 SKU: RETRO867
Categories: 10.95, Physical, RPM, RPM Sale, Sitewide Sale
Share:
Description
Volume Four in our successful series exploring the archive of songs and songwriters once signed to Apple Music. Favourites
are present again in songs from the pens of George Alexander and
Gallagher & Lyle. The majority however are new to the series
including some terrific previously unreleased full recording demos from
Promise and Contact. Known names crop up too with Timon, Brute
Force, the Fourmost, Stefan Grossman. Also the Focal Point make a
welcome return after appearing on Volume One of this series. Since when a
book on their experiences has been published which in turn is at the
shooting stage of becoming a movie! It’s the music that keeps us gripped
though. Classic slices of late 60 s pop much of it psych tinged with
mellotron, swirling strings, heavy organ, fey vocals, fantastic lyrical
imagery, English whimsy.
Additional information
Tracklist
Andy Ellison -Fool from Upper Eden / Focal Point -Far Away From Forever / Promise -Not Sarah / Fourmost -Do I Know You / Moving Finger -Jeremy The Lamp / Contact -Lovers From The Sky / Brute Force -King Of Fuh / Fourmost -Just Like Before / Stefan Grossman -Not You, Or I, My Dear / Timon -Now She Says She's Young / Promise -Where Love's Concerned / Marilyn Powell -Something To Believe In / Focal Point -Lonely Woman / Brute Force -Nobody Knows / Contact -Round And Round / Focal Point -Takes From The GPO Files / Fourmost -Rosetta / Marzipan -Sweet Water Mary / Lon and Derek Van Eaton -Sweet Music
Reviews (0)