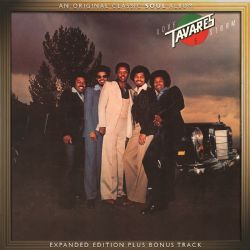 SKU: SMCR5127
Categories: 9.95, Physical, Sitewide Sale, SMR Sale, SoulMusic Records
Share:
Description
• Following the success of their best-selling 4th album for Capitol records, Sky High! (reissued by Soulmusic records in 2011, SMCR-5023) which included the international success ‘Heaven Must Be Missing An Angel,’ the Tavares brothers (Ralph, Tiny, Pooch, Chubby and Butch) reunited with that LP’s producer, (former Motown staffer) Freddie Perren for their 1977 set, Love Storm.
• New Bedford, Massachussetts-based family quintet had been building a solid audience for themselves after signing with Capitol in 1972: after initial success as R&B hit-makers, Tavares began reaching mainstream record buyers in the us with their 2nd and 3rd albums, respectively 1974’s Hard Core Poetry (SMCR-5097) and 1975’s In The City (SMCR 5022).
• Love Storm included the US R&B and top 30 pop hit ‘Whodunit’ which achieved top 5 status in the UK and charted in Australia, Canada, the Netherlands and New Zealand.
• The Perren-produced set also featured a duet, ‘I Wanna See You Soon,’ with then-new Capitol labelmate Freda Payne as well as a version of ‘Goodnight My Love’ (US R&B #14), a revival of a 1956 hit by popular singer Jesse Belvin.
• Other original material (mostly written by producer Freddie Perren and collaborator Keni St, Lewis) included the UK top 20 hit, ‘One Step Away’ and the Butch Tavares co-penned ballad ‘Fool Of The Year.’
• This expanded edition of Love Storm includes an extended remix of ‘Whodunit’ and notes by renowned US writer Kevin Goins with quotes from group members.
N.B: This title is released March 16 and will not be dispatched before his date.
Track Listing:
1.  WHODUNIT
2.  KEEP IN TOUCH
3.  I WANNA SEE YOU SOON (DUET WITH FREDA PAYNE)
4.  FOOL OF THE YEAR
5.  WATCHIN’ THE WOMAN’S MOVEMENT
6.  ONE STEP AWAY
7.  OUT OF THE PICTURE
8.  THE GOING UPS & THE COMING DOWNS
9.  GOODNIGHT MY LOVE
BONUS TRACK
10. WHODUNIT (1985 UK EXTENDED BEN LIEBRAND REMIX)
Additional information
Tracklist
Track listing as above.
Reviews (0)