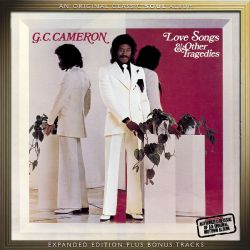 SoulMusic Records is continuing its’ much-acclaimed series of original Motown album reissues (which includes titles by The Dynamic Superiors, Tata Vega, Syreeta, Thelma Houston and Jerry Butler) with the release of the much-anticipated LOVE SONGS & OTHER TRAGEDIES, the 1974 solo LP set by G.C. Cameron, the former lead singer of The Spinners during their Motown years from 1967-1971.

Previously only available as a Japanese CD, this expanded edition is particularly in-demand by Motown and soul music lovers worldwide since it
includes ‘A’ and ‘B’ sides of all eight of G.C.’s MoWest singles plus four non-album Motown tracks released as singles, a total of twenty three glorious sides by the Mississippi-born singer/songwriter and producer, most on CD for the first time.

G.C.’s tenure with The Spinners included singing lead on their biggest Motown hit, the 1970 Stevie Wonder-penned and produced, now-classic ‘It’s A Shame.’ When the group went to Atlantic, G.C. began recording for MoWest with Motown founder Berry Gordy Jr. serving as executive producer on a number of the singles G.C. recorded for the label. Other producers included Willie Hutch, Smokey Robinson, Pam Sawyer & Gloria Jones and G.C. himself.

LOVE SONGS & OTHER TRAGEDIES includes production by Stevie Wonder (‘If You Don’t Love Me’) and Frank Wilson (‘Riverboat’) with Marvin Gaye doing the vocal arrangement for ‘Tippin.’’ This expanded edition features stellar notes by renowned U.S.writer Kevin Goins including a new interview with G.C. and quotes from producers, songwriters and engineers involved.