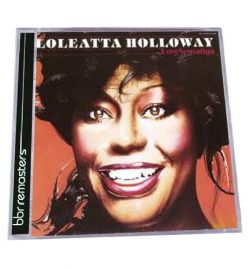 ·       Loleatta Holloway
was a dance music legend. Her amazing vocal talents gained her the reputation
as one of the premier vocalists of soul and dance music during the 70’s and
80’s. Holloway started her singing career with Queen of Gospel, Albertina Walker
(and her Caravans) before striking out on her own. She released her first
single “Rainbow ‘71” on the fledgling Apache label before moving to Aware
to record her first two albums prior to her work with Gold Mind/Salsoul.

·       Holloway’s first
album for Gold Mind was “Loleatta” (CDBBR0108) which spawned the R&B/Dance
hits ‘Worn Out Broken Heart,’ ‘Hit And Run’ and ‘Dreamin’.’ She recorded two
more albums for Gold Mind/Salsoul before contributing vocals to the disco
classic ‘Re-light My Fire’ by Dan Hartman, who went on to write and produce the
title track for her fourth and final album for Gold Mind/Salsoul, LOVE
SENSATION.
·       LOVE SENSATION,
released in 1980, provided Holloway with several disco hits. Not least was the
title track and album opener which scorched
dance floors and propelled this heavily sampled classic to the #1 spot
on the Billboard dance charts and rivals her recording of the timeless classic ‘Run
Away,’ with The Salsoul Orchestra, as her most enduring performance.  ‘Dance What ‘Cha Wanna’ and ‘Short End Of The
Stick’ (both penned by Bobby and Cecil Womack) were also strong dance floor
favourites, the former of which would bring even the most rooted wallflower to
express themselves with abandon. Holloway also shows off her incredible range
and vocal nuance on the ballads ‘My Way’ (Bobby Womack) and the classic Jerry
Butler and Otis Redding composition ‘I’ve Been Loving You Too Long.’
·
BBR is very proud to bring you LOVE
SENSATION, completely remastered and complete with extensive liner notes and extended
bonus content. Ideal for all R&B, Soul, Disco and Salsoul fans.
Available 28/10/2013
Additional information
Tracklist
Reviews (0)