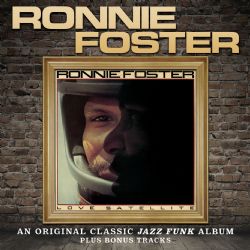 Star musician Ronnie Foster began his recording career in 1972 after building a following for himself by performing on shows with George Benson, Grant Green and Stanley Turrentine.

A multi-talented keyboardist whose focus became the organ (inspired by the legendary Jimmy Smith), the Buffalo, New York-native cut five critically-acclaimed albums for Blue Note between 1972-1975.

In 1978, Ronnie signed with Columbia Records; his label debut LOVE SATELLITE was produced by Jerry Peters (renowned for his work with Earth, Wind & Fire, Deniece Williams, Phyllis Hyman and Norman Connors among others) and featured a bevy of top musicians including Harvey Mason on drums, Alphonso Johnson and Byron Miller on bass, Paulinho Da Costa and Ndugu Chancler on percussion and special guest Roy Ayers on vibes.

Reissued in 2012 alongside his second Columbia album Delight (SMCR-5058) by for the SoulMusic Records’ classic jazz/funk series as an expanded edition with three bonus tracks, LOVE SATELLITE (which features nine original Foster compositions) has been out of print for several years since it was first made available on CD in Japan only. The album became a U.S. top 40 jazz best-seller for Ronnie buoyed by the great response to the single ‘Midnight Plane.’

Notes by renowned U.S. writer A. Scott Galloway include quotes from a 2012 interview with Ronnie for this reissue.Press:-

“The stand-out cut is Midnight Plane, with vibesman Roy Ayers stealing the show. To emphasise the point this reissue includes the album version, the extended US 12″ mix and the two parts from either side of the seven inch single.”

Additional information
Tracklist
1. WHY DON'T YOU LOOK
INSIDE