Return to previous page
View cart “Magnificent: 62 Classics From The Cramps’ Insane CollectionVarious Artists” has been added to your cart. 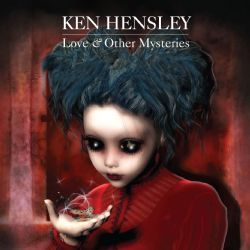 Esoteric
Recordings are pleased to announce the latest release on their front-line
label, ESOTERIC ANTENNA, dedicated to new releases by both new acts and
established artists. “Love and Other Mysteries” by KEN HENSLEY is the result of
three years spent in the studio, crafting an intensely personal album.

Known
by many from his days as a writer and member of URIAH HEEP, the writer of such
classics as “Lady in Black” and “July Morning” has created his deepest work to
date. He explains; “No-one is free from emotion and its effects. No one. I am a
poet and songwriter with the dreams and ambitions of an 11-year-old boy still
running rampant in my heart.

The songs on this CD came to me as naturally as
breathing, from the source I have always believed in and in which I now believe
more strongly than ever. I think this CD represents a very positive shift in my
musical focus and for me it is exciting to travel new and unexplored territory.
It must be every songwriter´s dream to be able to make a record in this way! I
know it was mine.

The lyrics are the single most important thing on this album
and it is these words that were permitted to produce and guide the direction of
the album”.

“Love
and Other Mysteries” sees Ken joined by guest vocalists including Glenn Hughes,
Santra Salkova, Sarah Rope, Irene Forniciari & Roberto Tiranti – All of
whom compliment a record that is fulfilling and sincere in its message.