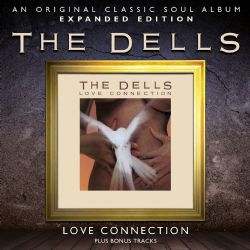 The mighty mighty DELLS enjoyed an amazing run of hits, starting in 1956 with “Oh What A Night” and continuing from 1966 to 1974 with Cadet Records (the Chess subsidiary).

In 1975, the soulful quintet signed with Mercury Records for a four-album association.

Released in 1977 as the follow up to “THEY SAID IT COULDN’T BE DONE, BUT WE DID IT!”(reissued in 2012 on SoulMusic Records, SMCR 5046), LOVE CONNECTION – making its worldwide CD debut with this reissue – saw The Dells returning to Philadelphia to work with the top-notch “Harris Machine” production team (which included Norman Harris, Earl Young and Ron Baker of The Trammps).

The Dells teamed with arrangers Ron Kersey, T.G. Conway and Allan Felder, songwriters such as (future Temptation) Ron Tyson and top Philly session musicians for the album, much in-demand by their many fans worldwide who consider LOVE CONNECTION as one of their best group’s best recordings of the ‘70s.

LOVE CONNECTION reached the Top 50 on the US R&B charts and included the R&B chart hit, ‘Private Property.’ This expanded edition includes a single edit of the track.

2012 marks the group’s 60th anniversary and to commemorate it, SoulMusic Records is reissuing this great album. Includes notes by Rico Washington with quotes from Chuck of The Dells among others.


2. GOD HELPS THOSE (WHO HELP THEMSELVES)