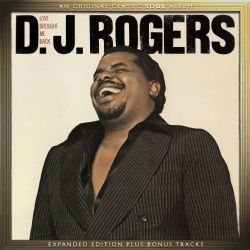 Los Angeles-born D.J. Rogers began his musical journey like  so many of his contemporaries – in the world of gospel: as a teenaged member of the Los Angeles Community Choir, he was featured on five albums for Savoy Records before recording with the ‘godfather of contemporary gospel,’ the Reverend James Cleveland.

In 1969, D.J. (Dwayne Julius) moved into secular music, recording a now-rare self-titled LP for singer/songwriter Leon Russell’s Shelter label. Signed to RCA Records in 1975, the powerhouse vocalist, songwriter, musician and producer made three critically-acclaimed albums for the label, establishing himself as a US soul music favourite with the now-classic ‘Say You Love Me’ (later recorded by Jennifer Holliday and Natalie Cole) and ‘Bula Jean.’

When Maurice White (founder of Earth, Wind & Fire) saw D.J. perform at an L.A. event, he signed him to his CBS-distributed Kalimba Productions.  The result was an association that spanned three released albums, the first of which was 1978’s LOVE BROUGHT ME BACK. The uplifting title track became D.J.’s biggest US hit (Top 20 R&B Singles) and the subsequent LP, his best-selling set.

This SoulMusic Records’ expanded edition reissue features five bonus tracks, including the 12” single mix of ‘Love Brought Me Back’ and single edits of ‘All My Love’ (a US Top 100 R&B hit) along with extensive liner notes by renowned US writer A. Scott Galloway with 2013 quotes from D.J. himself, Jerry Peters, James Gadson and Maxayn
Lewis.