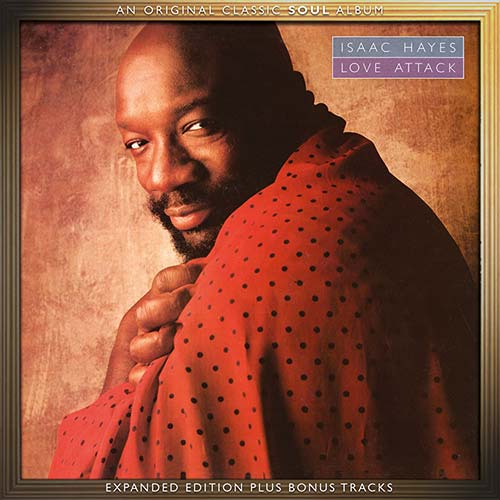 Soulmusic Records is proud to present an expanded edition of “Love Attack”, the 1988 Columbia album by the late and legendary Isaac Hayes.

• Soulmusic Records is proud to present an expanded edition of “Love Attack”, the 1988 Columbia album by the late and legendary Isaac Hayes.

• Already established as a ‘70s musical icon, “Black Moses” (as he became known) had created a global audience thanks to his groundbreaking 1969 concept-driven “Hot Buttered Soul” set and the Oscar-winning ‘Theme From Shaft’ alongside a series of best-selling albums for Stax Records (where he began his career as a songwriter and producer with David Porter, creating hits for Sam & Dave and Carla Thomas among others).

• By 1986, when Isaac signed with Columbia Records, he was coming out of a hiatus from recording; with the release of “U-Turn”, he faced a very different marketplace: utilizing then-new technology, Isaac scored a double-sided U.S. R&B top 10 hit single with ‘Ike’s Rap’ and ‘Hey Girl’.

• He approached the follow up LP “Love Attack” in much the same manner and while it didn’t yield the same kind of chart success, the album contained a number of musical gems including a remake of ‘I Stand Accused’ which he’d cut for his 1970 solo debut “The Isaac Hayes Movement”; a sexy cover of the 1975 Major Harris hit, ‘Love Won’t Let Me Wait’; a version of Billy Joel’s ‘She’s Got A Way’; and the dance-driven original ‘Showdown.’

• This 2016 expanded edition includes four mixes of ‘Showdown’ along with the non-album ‘b’ side. ‘Curious’; stellar notes from UK writer Charles Waring; and great remastering by Donald Cleveland.

2. LET ME BE YOUR EVERYTHING