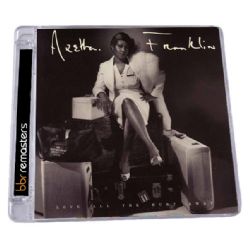 Love All The Hurt Away
Aretha Franklin

SKU: CDBBR0189
Categories: 9.95, Big Break Records, Physical, Sitewide Sale
Share:
Description
After six
years at Columbia, Aretha Franklin signed with Atlantic Records in 1967 and
unleashed a stunning array of hit singles during the mid-sixties to the mid-seventies
including ‘Respect’, ‘Chain Of Fools’, ‘Spanish Harlem’ and ‘Until You Come
Back To Me (That’s What I’m Going To Do).’
LOVE ALL THE
HURT AWAY was Aretha’s sophomore release for Arista Records in 1981. It spent
26 weeks in the R&B chart peaking at #4, it also made #36 in the Pop chart
with sales of around a quarter of a million.
LOVE ALL THE
HURT AWAY reached the #6 position and #46 in the Pop charts. This is a duet
with George Benson
HOLD ON I’M
COMIN’, a Sam & Dave cover, gained Aretha her 11th Grammy Award (for
Best R&B Vocal Performance – her first Grammy since 1974). This was the
second UK single and received a lot of play in discos.
IT’S MY TURN
is a cover of Diana Ross which gained Aretha the #29 position in the R&B
chart.
Released in deluxe Super Jewel cases, with three bonus tracks, LOVE ALL
THE HURT AWAY is a must for all Soul and Funk fans out there!