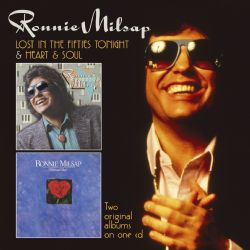 SKU: TBIRDAM038
Categories: 9.95, Physical, Sitewide Sale, T-Bird Americana
Share:
Description
From the mid
70s to the early 90s, Ronnie Milsap was one of the biggest stars in Country
music, “Lost In The Fifties Tonight” was one of his biggest albums reaching
No.1 on the country charts in 1986 and its follow up “Heart & Soul” was one
of his last top 20 country album chart hits. The two albums between them
spawned 7 country single No.1s and in total between 1973 and 1989 Ronnie placed
35 singles at No.1 on Billboards country chart.
Along the way he accumulated four Academy Of Country Music Awards, eight
CMAs and six Grammy awards.
The track and album, “Lost In The
Fifties Tonight” is his most honored work receiving the following awards.
Academy Of Country Music 1985 Song Of
The Year,
Billboard No.1 Country Song of 1985, Country
Music Association 1986 Album Of The Year and 1985 Grammy Best Male Country
Vocal Performance.
In 1988 Ronnie snagged another Grammy
for his Kenny Rogers duet from “Heart & Soul, ‘Make No Mistake She’s Mine’
in the Best Country Vocal Performance, Duet category.
Additional information
Tracklist