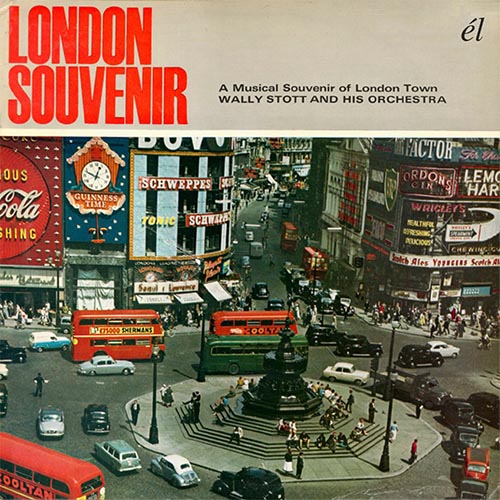 London Souvenir is Wally Stott’s “tone picture” of London, which in its Eclectic combination of nursery tunes, light music motifs and jazz, skilfully captures the mood of the capital in the late fifties and the prevailing sense of traditional meets the modern world, or establish-ment meets pop.

• Wally Stott, who later became Angela Morley, was one of the great unsung heroes of British popular music. During its 1950s heyday, he established himself as one of the leading composers of light orchestral music while becoming resident musical director at the new Philips label.

• Along the way, he wrote the themes for the Tony Hancock television programmes and was also musical director for the Goons. In January 1959, Shirley Bassey celebrated her 22nd birthday by reaching number 1 on the UK single charts with Stott’s arrangement of ‘As I Love You,’ and he was at the helm for ‘Bobby’s Girl’ by Susan Maughan which would be a 1962 Christmas hit. With Dusty Springfield he created ‘How Can I Be Sure,’ ‘All I See Is You,’ ‘Where Am I Going?’ and ‘I Will Always Want You.’ Versatility personified, Wally presided over Mel Tormé’s historic London sessions, Noel Coward’s final (and finest) British recordings and worked also with Marty Wilde, Diana Dors, Roy Castle, Anne Shelton and Harry Secombe.

• In the mid-sixties, along with Reg Guest and Peter Knight, he wrote the Ecstatic string arrangements for Scott Walker’s momentous quartet of solo albums, “Scott 1 to 4.” Such eternal masterpieces as ‘Montague Terrace (in Blue),’ ‘When Joanna Loved Me,’ ‘Such A Small Love,’ ‘Jackie,’ ‘Boy Child,’ ‘On Your Own Again’ and almost all of Walker’s magnum opus, “Scott 3,” including ‘It’s Raining Today,’ ‘Copenhagen,’ ‘Rosemary’ and ‘Big Louise;’ these are supreme examples of the art of Wally Stott.

• His broad musical vocabulary made him the ideal collaborator and he proved breathtakingly successful in realising the dramatic orchestral settings in Scott Walker’s head. The singer later commented that “Working with Wally Stott on “Scott 3” was like having Delius writing for you.”

• London Souvenir is Wally Stott’s “tone picture” of London, which in its Eclectic combination of nursery tunes, light music motifs and jazz, skilfully captures the mood of the capital in the late fifties and the prevailing sense of traditional meets the modern world, or establish-ment meets pop. The album is a mosaic of musical and cultural themes from St Paul’s Cathedral to the River Thames, a stylish musical portrait of a great city, sculpted by arguably Britain’s finest arranger.

• The second half of the programme comprises selections from the Mel Torme and Noel Coward sessions from 1956 and 1953 respectively combined with Stott’s gorgeous ‘A Canadian In Mayfair,’ his personal tribute to Robert Farnon, and compositions of contemporaries Trevor Duncan and Clive Richardson. These were the masters of British Light Music; skilled technicians who provided the musical backcloth of fifties Britain, who’s joyful melodies continue to echo reassuringly down the years.

N.B. This title is released 23rd October 2015 and will not be dispatched before this date.