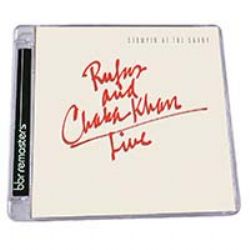 SKU: WCDBBRX0313
Categories: 10.95, Big Break Records, Physical, Sitewide Sale
Share:
Description
• Rufus were one of Funk’s most successful American bands in the 1970’s. Chaka Khan joined the group in 1973 and scored two major hits with the group the following year in the form of “Tell Me Something Good” (written for Chaka by Stevie Wonder) and You Got The Love. Lead vocal duties in the group were shared by Chaka and Tony Maiden though the powerhouse vocals of the former quickly came to redefine the band. As evidenced on their solid output throughout the seventies on further hits like “Sweet Thing”, “At Midnight (My Love Will Lift You Up)” and the Quincy Jones produced “Do You Love What You Feel”, Rufus & Chaka Khan were a symbiotic unit with the group’s brand of grinding funk fusing wonderfully with Chaka’s ecstatic vocal interplay.
• By 1981, Chaka had framed herself with a strong run of post-disco soul records and exited Rufus. However, from February 12-14 1982, Chaka rejoined the band for what would be their final performances together at New York’s famed Savoy Theatre. Recordings from these performances were later mastered and packaged as a double live LP, RUFUS & CHAKA KHAN LIVE – STOMPIN’ AT THE SAVOY (R&B #4/Pop #50/UK #64). The results amount to some of the most amazing work the group ever committed to record.
• STOMPIN’ AT THE SAVOY also included four new studio recordings. ‘Ain’t Nobody’ (R&B #1/Pop #22/UK #8) became an instant classic and is undoubtedly Rufus & Chaka Khan at their richest, with the emerging electro-funk of the era laying the groundwork for Chaka’s sensuous vocals. The Jeffrey Osborne co-penned “One Million Kisses” (R&B #37/UK #86) remains one of the band’s more wistful and soulful selections in their latter-day period whilst “Try a Little Understanding” features a wonderfully playful bind between Chaka and Tony’s vocals. Their spine tingling reading of the Jazz standard “Don’t Go To Strangers” was recorded live in the studio with an orchestra and features a stirring vocal by Chaka.
• BBR is thrilled to present the first remastered edition of RUFUS & CHAKA KHAN LIVE – STOMPIN’ AT THE SAVOY on a single CD with exclusive interviews with band members. More than thirty years later and the record continues to be an essential chapter in the band’s legacy.
N.B This title is released August 14th 2015 and will not be dispatched before this date.
TRACK LISTING:
1. YOU GOT THE LOVE (live)
2. ONCE YOU GET STARTED (live)
3. DANCE WIT’ ME (live)
4. SWEET THING (live)
5. TELL ME SOMETHING GOOD (live)
6. YOU’RE WELCOME, STOP ON BY (live)
7. PACK’D MY BAGS (live)
8. I’M A WOMAN (I’M A BACKBONE) (live)
9. AT MIDNIGHT (MY LOVE WILL LIFT YOU UP) (live)
10. AIN’T THAT PECULIAR (live)
11. STAY (live)
12. WHAT CHA’ GONNA DO FOR ME (live)
13. DO YOU LOVE WHAT YOU FEEL (live)
14. AIN’T NOBODY (studio recording)
15. ONE MILLION KISSES (studio recording)
16. TRY A LITTLE UNDERSTANDING (studio recording)
17. DON’T GO TO STRANGERS (studio recording)
Additional information
Tracklist
Track listing as above.
Reviews (0)