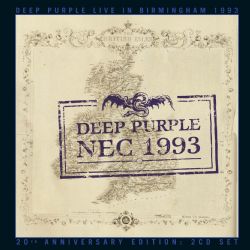 • Many consider the vintage “Mk2” Deep Purple line-up of Ritchie Blackmore on guitar, lead screamer Ian Gillan, bassist Roger Glover on bass, the late, great Jon Lord on keyboards and the drumming of Ian Paice, to be the near definitive version of this classic British rock institution. It was this line-up that got back together – for a third and last time – to tour and record for their 25th Anniversary in 1993.
• Despite playing what many consider to be some of their best ever shows in mainland Europe, especially during a lengthy 13 date German tour, Blackmore dropped the bombshell midway through the European leg that these would his last concerts with the band. True to his word, the guitarist played his final ever show with Deep Purple in Helsinki on 17th November 1993, making this CD, recorded a week earlier at Birmingham’s NEC on 9th November the last gig he did with the band on British soil.
• It was this gig that was chosen to be captured on film and tape for future release, issued the following year as the “Come Hell Or High Water” DVD and CD. Unfortunately, many consider this particular show to be the nadir of the band’s career, mainly due to guitarist Ritchie’s absence on a couple of numbers, refusing to take the stage until it was clear of cameramen, and making his point by soaking one of them with a cup of water when he failed to leave the stage in time.
• Despite this, the 1993 NEC set captures many Purple favourites across its 18 tracks, including ‘Highway Star’, ‘Black Night’ and ‘Woman From Tokyo’, and no less than four songs from the then latest “The Battle Rages On”, making this a unique memento from these legendary rockers. It should come as no surprise that the set is capped by the band’s most enduring hit, ‘Smoke On The Water’.
Additional information
Tracklist
DISC ONE                 DISC TWO
1. HIGHWAY STAR 1. CHILD IN TIME
2. BLACK NIGHT 2. ANYA
3. TALK ABOUT LOVE 3. THE BATTLE RAGES ON
4. A TWIST IN THE TAIL 4. LAZY/DRUM SOLO
5. PERFECT STRANGERS 5. SPACE TRUCKIN'
6. BEETHOVEN         6. WOMAN FROM TOKYO
7. JON'S KEYBOARD SOLO 7. PAINT IT BLACK
8. KNOCKIN' AT YOUR BACK DOOR                 8. HUSH
9. ANYONE'S DAUGHTER 9. SMOKE ON THE WATER
Reviews (0)