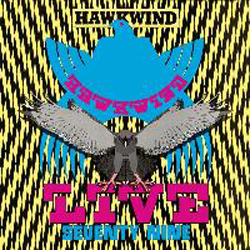 SKU: ATOMCD1011
Categories: 9.95, Atomhenge, Esoteric Sale, Hawkwind Sale, Physical, Sitewide Sale
Share:
Description
Released 30/03/09. ATOMHENGE, the home of HAWKWIND’s catalogue from 1976 1997, continue their series of definitive reissued editions of these classic albums with the release of LIVE SEVENTY NINE. The album, originally released in 1980, saw Hawkwind storm the UK charts and spawned the hit single Shot Down in the Night, along with the first appearance of the classic Motorway City on vinyl. This expanded edition features a 2 bonus tracks. The first official CD release in many years; this Atomhenge edition is remastered from the original master tapes.
Additional information
Tracklist
Shot Down In The Night / 2. Motorway City / Spirit Of The Age / Brainstorm / Lighthouse / Master Of The Universe / Silver Machine (requim)