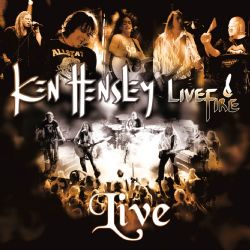 SKU: HNECD017D
Categories: 10.95, HNE Recordings, HNE Sale, Physical, Sitewide Sale
Share:
Description
A
legendary figure in rock, Ken Hensley has a long and varied career, having
played with and fronted acts as diverse as British 60s psyche rockers The Gods
to American southern rockers Blackfoot… but Ken is probably best known for the
albums he made in the 1970s as musician and songwriter with British rock
institution, Uriah Heep, from 1970’s “Very ’Eavy Very ’Umble” until 1980’s
“Conquest”.
In
2006 he formed Live Fire, providing his trademark keyboards, guitar and vocals,
alongside Norwegians Ken
Ingwersen,Eirikur Hauksson, Sid Ringsby & Willy Bendiksen, initially
just to perform Ken’s songs live.
In
2009, Tom Arne Fossheim replaced Willy Bendiksen as drummer, and continues with
the band, then in 2011
Ken Hensley & Live Fire released their first studio album “Faster”.
Produced
by Ken himself, “LIVE!!” captures Ken Hensley & Live Fire on their 2012
European tour at dates in Switzerland and Germany whilst promoting “Faster”.
Presented
as a deluxe double CD package, this classic set kicks off with ‘Set Me Free
(From Yesterday)’ and ‘The Curse’ from the “Faster” album. “Live!!” is also a
treat for fans of all things Ken, including unique versions of Uriah Heep
classics ‘Look At Yourself’, ‘July Morning’, ‘Easy Living’ and ‘Gypsy’, and
even delving as far back as ‘Rain’, originally recorded for his debut solo LP,
“Proud Words On A Dusty Shelf”.