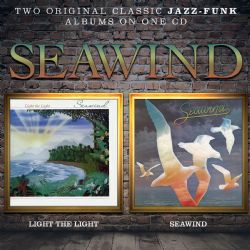 After relocating to Los Angeles in 1976, Seawind signed with CTI Records before moving to A&M’s Horizon label in 1979, with famed producer (and then label head) Tommy LiPuma producing LIGHT THE LIGHT, which contained original compositions, mostly written by leader Wilson with his then-wife Pauline’s soulful vocals at the fore. The critically acclaimed LP reached No. 8 on Billboard’s US