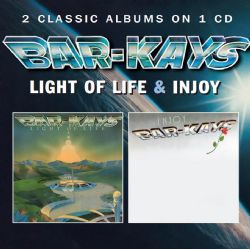 Originally released in 1978 and 1979 – these two classic Bar-Kays albums “Light Of Life” and “Injoy” – now receive a keenly awaited re-press.

Originally released in 1978 and 1979 – these two classic Bar-Kays albums “Light Of Life” and “Injoy” – now receive a keenly awaited re-press.

Other stand-out cuts are ‘I Lean On You / You Lean On Me’ and ‘Running In And Out Of My Life’.

The Bar-Kays were formed in 1966 in Memphis Tennessee after meeting as session musicians for Stax Records. The original line-up was employed as Otis Redding’s backing band, and members died in the plane crash that killed the soul legend.

The remoulded group went on to have success on the Mercury label from 1976 through 1987 including the albums “Too Hot To Stop” and “Flying High On Your Love” which are also available on the Cherry Red label SuperBird (SBIRD0022CD).