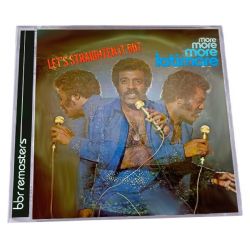 Benny Latimore, from Charleston, Tennessee, was a deep soul singer of high repute. Latimore started his musical career as a pianist, backing up such artists as Joe Henderson and Steve Alaimo having relocated to the Florida area. Latimore’s sultry vocal style, which fused blues and soul, came to the attention of Miami music Svengali Henry Stone and he soon signed the singer to his Dade label in the mid-sixties cutting several deep soul sides to strong critical acclaim but with modest success.

In the early 70’s, having dropped his first name as an artist, Latimore joined Glades Records and achieved his first chart success with a jazzy rendition of T-Bone Walker’s ‘Stormy Monday,’ which peaked at #27 R&B and #102 Pop in late 1973.

The following year Latimore released his second album on Glades, LET’S STRAIGHTEN IT OUT (Originally titled “More, More, More”) to high acclaim. His tough talking, straight ahead vocal style is put at the centre of each of these uncompromising, confessional songs by his producer on most of his Glades releases, the aforementioned Steve Alaimo.

The only single culled from this set was the title track itself. ‘Let’s Straighten It Out’ is a heart-wrenching track which Latimore injects with his simmering blues/soul inflections. The release of this single in 1974 proved that Latimore’s southern soul style would storm across the US as it topped the US R&B charts and crossed over into the Pop market reaching #31.