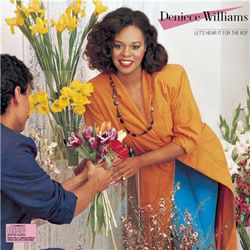 Let’s Hear It For The Boy
Deniece Williams

Throughout the 70s and 80s DENIECE WILLIAMS released a string of successful works on Columbia/ARC Records, scoring certified Gold selling albums on both labels along with numerous appearances across the US and UK charts.  In 1976 she released her debut album, This Is Niecy, featuring the mega-hit FREE which topped the UK Pop chart. Song Bird, her sophomore set released on Columbia in 1977, was once again produced by Earth, Wind & Fire s Maurice White.

1979 saw Deniece move to ARC Records where she released 3 very successful albums including the Gold selling, My Melody.  LET S HEAR IT FOR THE BOY was a single recorded for the multi platinum-selling soundtrack album for the iconic movie Footloose.  When the huge success of the single was realised, an album was recorded.  Released in 1984, the title track returned DENIECE WILLIAMS to #1 on the US Pop, R&B and Dance charts and secured a#2 position on the UK Pop chart, held from the top by Wham’s Wake Me Up Before You Go-Go! Deniece also received two Grammy nominations in the process. Other notable singles included on this release include the powerful and now iconic soulful BLACK BUTTERFLY and the Dance hit NEXT LOVE, which both secured top 20 R&B positions.

BBR is extremely proud to present DENIECE WILLIAMS LETS HEAR IT FOR THE BOY, lovingly re-mastered in full, expanded form. Complete with extensive liner notes featuring interviews along with added bonus tracks.  Released in deluxe Super Jewel cases, this BBR REMASTER is long overdue and is a must for all 80’s Soul and Pop fans everywhere!

Notice: id was called incorrectly. Product properties should not be accessed directly. Backtrace: require('wp-blog-header.php'), require_once('wp-includes/template-loader.php'), include('/themes/xstore/woocommerce/single-product.php'), wc_get_template_part, load_template, require('/themes/xstore/woocommerce/content-single-product.php'), do_action('woocommerce_after_single_product_summary'), WP_Hook->do_action, WP_Hook->apply_filters, woocommerce_output_product_data_tabs, wc_get_template, include('/themes/xstore/woocommerce/single-product/tabs/tabs.php'), wpb_new_product_tab_content, WC_Abstract_Legacy_Product->__get, wc_doing_it_wrong Please see Debugging in WordPress for more information. (This message was added in version 3.0.) in /home/cherryredco/public_html/wp-includes/functions.php on line 4986
LET'S HEAR IT FOR THE BOY / I WANT YOU / PICKING UP THE PIECES / BLACK BUTTERFLY / NEXT LOVE / HAUNTING ME / DON'T TELL ME WE HAVE NOTHING / BLIND DATING / WRAPPED UP / WHITER THAN SNOW