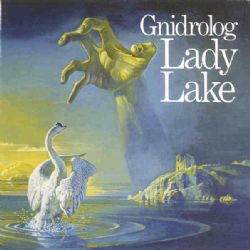 REMASTERED FROM THE
ORIGINAL MASTER TAPES

WITH A PREVIOUSLY
UNRELEASED BONUS TRACK

Esoteric Recordings are pleased to announce a newly remastered edition
of the legendary album by GNIDROLOG, “Lady Lake”.

The album saw GNIDROLOG continue to develop their unique form of
Progressive Rock, which had critics compare the band to cohorts such as GENTLE
GIANT and VAN DER GRAAF GENERATOR. Although failing to sell in huge quantities,
GNIDROLOG’s status has grown over the years with their original vinyl albums
reaching huge sums among collectors.

This Esoteric Recordings reissue has been newly remastered from the
original master tapes and features a
previously unreleased bonus track, a booklet that fully restores all
original album artwork with a new essay.

Additional information
Tracklist
1. I COULD NEVER BE A SOLDIER
2. SHIP
3. A DOG WITH NO COLLAR
4. LADY LAKE
5. SAME DREAMS
6. SOCIAL EMBARRASSMENT
7. BABY MOVE ON (Previously Unreleased)