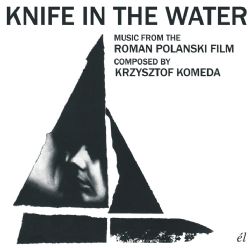 the film with which he effectively announced his genius to

A middle class
couple pick up a hitchhiker who turns their lives upside down in the course of
one day. Here is a natural filmmaker making a stunning cinematic debut out of
almost nothing.
It was first
seen in the West at the Venice Film Festival,

where the International Federation of Film Critics gave it their

FIPRESCI award. Two years later it would be nominated for an Academy Award as
Best Foreign Language Film.

The screenplay
was by Polanski and Jerzy Skolimowski

It opened doors for Polanski in Western Europe and America that made his
extraordinary career possible.

The music was
written by the brilliant young Polish composer and pianist Krzysztof Komeda. It
is arguably one of the most effective scores in cinema history; understated
jazz that compliments the picture’s sharp monochrome cinematography and the
tense minimalism of the script and brings to the film another emotional
dimension.
Also included
here are three pieces composed and performed by Komeda for Andrzej Wajda’s 1960
film The Innocent Sorcerers. Written by Skolimowski, this is a stylish,
humorous film about Polish youth: their underground scene, girls, scooters,
jazz etc. Both Komeda and Polanski appear on screen.
Komeda would go
on to write three further film scores for Polanski; Rosemary’s Baby, The
Fearless Vampire Killers, Cul-de-sac. Overall Komeda wrote more than seventy
soundtracks before his tragically early, somewhat mysterious death in 1969, at
the age of just 38.